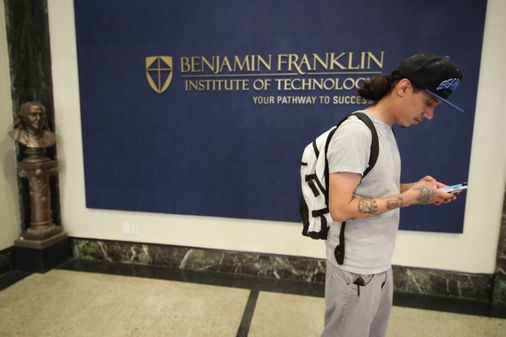 Aisha Francis was recently named CEO, making her one of the few African-American women running a college in this region.

In recent years, the school has dreamed big dreams: Its campus is under agreement to be sold for many millions of dollars (the price has never been disclosed) to a big-time developer, Related Beal. BFIT, as it is now branded, has announced plans to move to a building on Harrison Avenue in Nubian Square, the better to be close to the students it currently serves.

That’s where the public part of the story ends and the mystery begins.

According to multiple sources, Benjamin Franklin is engaged in secret talks to merge with Wentworth Institute of Technology. The negotiations are so hush-hush that board members are bound by nondisclosure agreements while the deal is being hammered out. What that would do to the pending sale and move to Roxbury is unclear.

The talks are a source of deep frustration to some supporters of Franklin Institute — among the few who are aware of them — who believe that the process is compromised by a lack of transparency and, quite possibly, at least one serious conflict of interest. They believe that the college is a community asset, and that its future should not be determined entirely behind closed doors.

Benjamin Franklin officials declined to comment on the negotiations with Wentworth.

A spokesman for the college sent a statement that said this: “As part of an ongoing strategic planning process, the Benjamin Franklin Institute of Technology Board of Trustees is exploring several options, including potential partnerships, to assure continued success in reaching, educating and graduating the Greater Boston students we serve.

“Our first priority is assuring continued access to BFIT’s unique education model for our often-underrepresented student population. We have no news to share about any potential partner discussions at this time.”

Note what the statement carefully doesn’t deny: that the school is talking merger with one of its neighbors.

Even before the pandemic, the times were challenging for small New England colleges, and more than one has fallen by the wayside in recent years, or merged itself out of existence.

But critics of this potential deal note that the general trends of declining enrollment don’t necessarily hold true for older or nontraditional students. In fact, enrollment at Benjamin Franklin has been rising, not falling, in recent years.

And, of course, much of the premise of selling the property was that the proceeds, which could be as high as $50 million, by some estimates, would provide enough cash to run the school in a new, community-oriented location for years.

This might be a good place to note that one of the leading advocates of selling is said by multiple sources with direct knowledge of the negotiations to have been Ryan Hutchins, who was then chair of the board. Hutchins, a construction executive, stepped down from the board this past June, long after talks began — but he remains a trustee of Wentworth, his alma mater. (The Benjamin Franklin website lists him as a “trustee emeritus.”)

I tried to ask Hutchins about the propriety of simultaneously serving on the boards of two institutions that are negotiating a transaction, but he didn’t return my call.

This is a situation in which representation matters. The board of BFIT is undoubtedly well-meaning. But even a cursory glance at its makeup shows a board that doesn’t look much like the student body whose interests it is supposed to protect.

“Our people need jobs and opportunities, and this is the pipeline,” Janey said. “”We also want to make sure the community is engaged and that this fits into the larger development in the square.” Janey said she hadn’t heard anything about the proposed merger, adding, “My interest is certainly piqued.”

Perhaps Benjamin Franklin would benefit from a merger, though what it stands to gain in this deal isn’t obvious to me. Maybe the school needs a partner, the forthcoming real estate windfall notwithstanding. Maybe Wentworth would go through with the planned move to Roxbury, which could benefit the community in multiple ways.

Here’s what I know: Merging colleges — especially when one caters to an underserved community — is different from merging hedge funds or advertising agencies. The public has a right to know what it would mean, while their voices can still hope to have some impact. Students have a right to information that will affect their futures.

So whatever Benjamin Franklin and Wentworth are negotiating, we all have a right to know who’s at the table, and who stands to benefit, and how.

No doubt Benjamin Franklin himself — a great champion of transparency in his day — would agree.

Adrian Walker is a Globe columnist. He can be reached at adrian.walker@globe.com. Follow him on Twitter @Adrian_Walker.