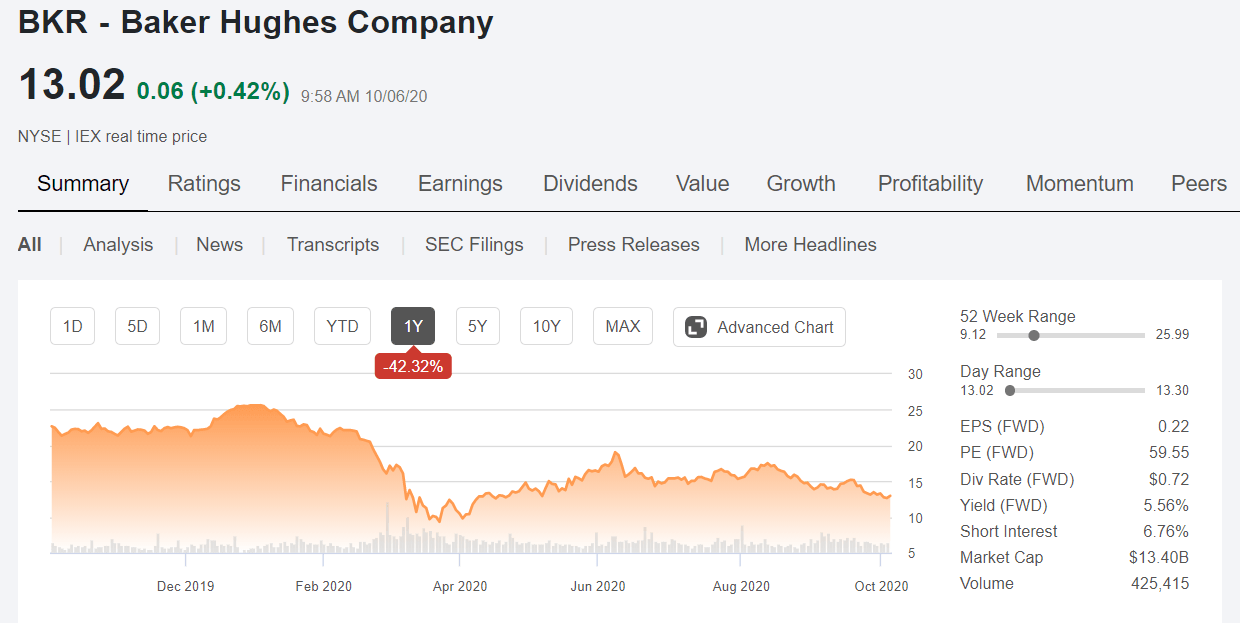 It’s been a while since we took a look at Baker Hughes (BKR). Too long actually, but time may help to provide perspective on our core interest, are they investible at this point in time?

Baker, a leading producer of energy related good and services, reported a dismal Q2 and guided down any investors expectations for the immediate future. As the share price indicates, any recovery in OFS remains a story for a few quarters down the road. Farther than the eye can see actually. A story that’s been largely true for several years now. 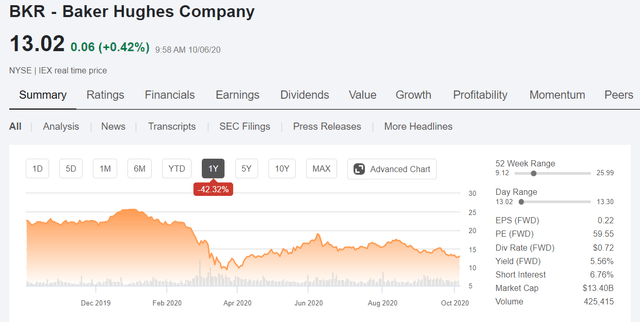 There were a few bright spots and instead of a recap of lousy revenue and profit numbers, and the expectation of more of the same, we will focus on the bright spots in this article.

There is also the dividend currently yielding ~5.5%. We’ll touch on its relative safety as we wrap up.

The investment thesis for Baker Hughes

As with all the major Oilfield Service-OFS companies, there has been a concerted effort to cut costs and generate cash flow from reduced revenues at Baker. They’ve been to execute on the cost cutting to the extent that $230 million operating cash flow was generated and an adjusted free cash flow of $63 million for the quarter. One can safely assume they are buying the large bundles of toilet paper at the discount warehouse.

As traditional oil and gas services remain in QoQ decline, Baker is working to build profit in areas where they have an advantage or specific expertise. Eventually, as drilling returns globally and rigs are added to shale plays, the shares of Baker and all the major service companies will rate multiple revisions as production cannot be maintained without them.

If you believe that a shale decline induced acceleration of oil prices is coming (as we do), then Baker is a company you should consider for your portfolio.

One thing that makes them stand out is maintenance of their currently ~4.5% yielding dividend. Their strong balance sheet is buffered by ~$4 billion in cash on hand, and no near-term debt maturities on their $6.6 billion in LT debt. Capex of $630 million is easily covered by cash flow of $230 million for the quarter and ~$1 billion for the year. The dividend obligation of ~$472 million for the year requires a little borrowing or consumption of cash to cover, but not enough for them to back away from it at this point. I don’t see the dividend being in danger at this point.

Remote operations/AI expertise was cited by an analyst as an accelerant for the stock over the next couple of years. This approach is hardly unique to Baker as all the big colors, Halliburton (HAL) and Schlumberger (SLB), are traveling the same road. I covered Hally’s move in an article a couple of months ago. Give it a read or reread for more color here, as most of the verbiage would directly translate to BKR with appropriate name changes.

One of the things mentioned in the Evercore upgrade was BKR’s depth at AI execution with their C3-AI portfolio, alliance with Microsoft (MSFT), and the number of sensors they have installed. 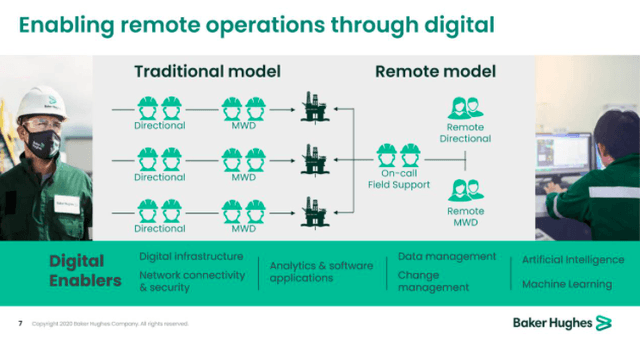 Source: The graphic above shows the manpower needs are reduced by 50% with AI infrastructure, reducing cost and risk.

“I think, as you look at the example we gave with Equinor in the Norwegian Continental shelf it’s a great example of where, we recently implemented their IO3 oilfield service, remote operations and we’re able to implement it on another six rigs, and reducing our service personnel by 50%.

And that’s really the opportunity we have going forward. It’s going to take some time, and really, as customers gain more comfort with the idea of remote operations, but that’s going to be the opportunity at hand. So, it really fits in well with our overall digital strategy, including what we do with C3.ai, as well as across all of our product companies.” 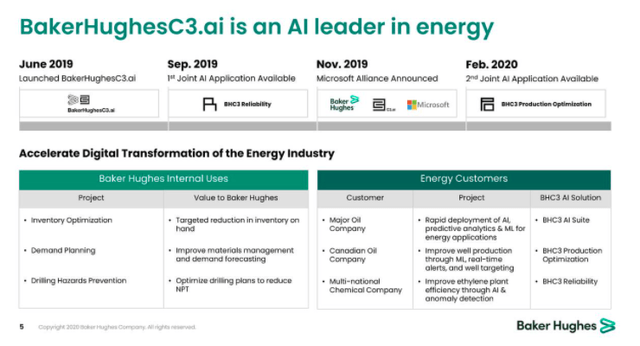 Basically the C3.AI is the “Internet of Things,” on steroids. The slide above gives a glimpse of the seamless integration of internal and external, customer focused applications.

The world is on a climate-driven drive to capture carbon out of the atmosphere. By hook or by crook, the die is set – we’re going to do this. I’ll avoid commentary on just how daft I think this is and focus on the impact to Baker’s future revenues. 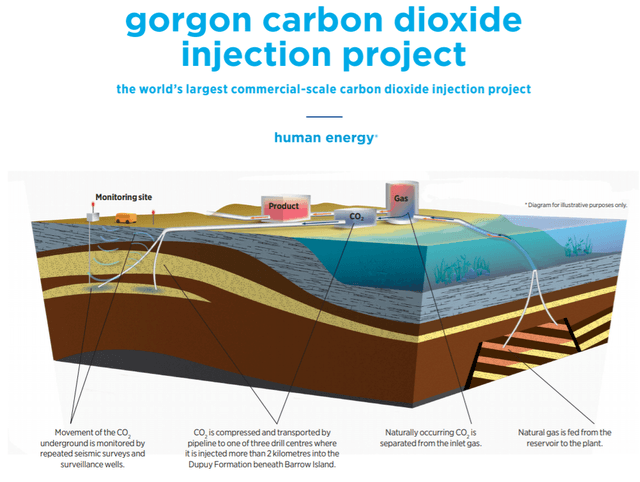 This one is pretty straightforward, strip Co2 from natural gas prior to liquefaction, and re-inject into the reservoir. This has ancillary benefits as well, notable among them maintenance of reservoir pressure.

“We’re on the largest CCUS project out there in Australia with Gorgon, utilizing our compressors. And now, we’re also entering the theme of hydrogen. And most recently, last week, we tested our NovaLT with a blend of gas and hydrogen with Snam, which is the largest European pipeline provider.” 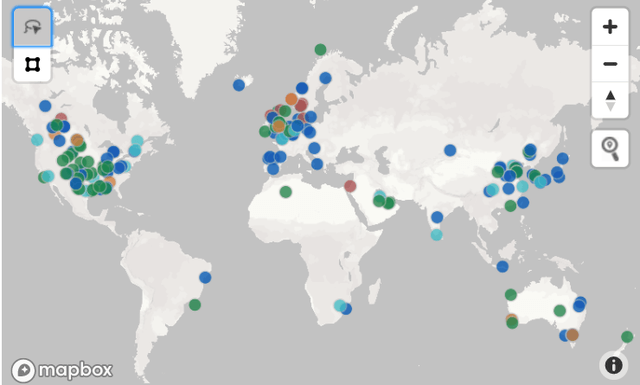 The slide above shows a number of opportunities similar to Gorgon progressing along various stages of FID.

I discussed the key driver for this technology in an article on BKR earlier this year. This is a key differentiator for Baker that is not replicated in its two largest direct competitors.

This application also uses Baker’s core differentiating technology, the jet engine driven compressor. They just scooped up a big order from Qatar-LNG for the North Field development. I went into a lot of detail on Baker’s advantages in the LNG space in a prior article, and I’ll refer you to it now for more color in this application. Baker is also on the massive Russian Novatek LNG project.

Worth mentioning is that Baker has also field-trialed a LN 9000 compressor for use with 10% Hydrogen with SNAM in Italy. Gas pipelines also need compression, and the same advantages and variants of the equipment used in LNG plants are applicable here. An area for growth in Baker.

Evercore ISI has recently upgraded Baker seeing a 60% upside from current levels. This upside is driven by their digital AI offerings which Evercore asserts will enable a stock multiple of 9X on their $3 billion forecast EBITDA, or ~$23-24 share.

Baker CEO Lorenzo Simonelli thinks the stock is a good buy at present levels, having made a direct buy of 71K shares in early September 2020. Other senior execs at BKR have also made direct open market buys in the second half. It’s always nice when the company’s managers put some skin in the game.

Baker is a relatively safe way to play the OFS space and get paid to do it, while you wait for some capital appreciation in a couple of years. I won’t dive any deeper than the Evercore estimate of 9X 2022 EBITDA of $3 billion. If that is achieved, then Baker represents a pretty good risk-reward scenario.

The risk is that things could continue to stagnate or deteriorate from here. You have to allow for that, but I don’t see it as a likely scenario as I think oil prices will advance in the year ahead from falling shale supplies and demand growth in the global economy. 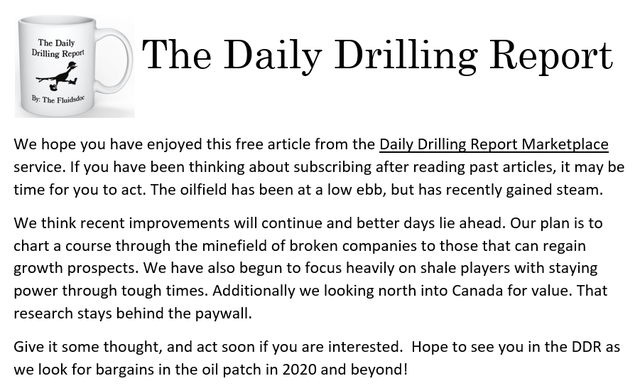 Disclosure: I/we have no positions in any stocks mentioned, but may initiate a long position in BKR over the next 72 hours. I wrote this article myself, and it expresses my own opinions. I am not receiving compensation for it (other than from Seeking Alpha). I have no business relationship with any company whose stock is mentioned in this article.