At a time when pandemic-induced uncertainty and anxiety is getting the better of most, some of Bollywood’s brightest are filling empty, shoot-less days tapping into the therapeutic benefits of music. Ticking off long-unfulfilled resolutions, Vicky Kaushal, on Independence Day, was plucking on the strings of a sitar to pay an ode to the country with “Ae Watan”, while lovebirds and Shibani Dandekar jammed to “Shallow” on the guitar and the piano. The coronavirus-triggered lockdown has certainly been ‘note’ worthy for .

Music has always been an integral part of his life and despite choosing acting as his profession, singer Mukesh’s grandson continues to stay in touch with the musician within. But with his piano locked up in the office, Neil got to brush up on his harmonium skills on their ancestral instrument after moving in with his parents, along with doing daily riyaz with father, Nitin. “My grandfather’s guruji taught me the harmonium and I feel connected with him when I play my grandfather’s songs on it, my favourites being Mera Naam Joker’s ‘Jeena Yahaan Marna Yahaan’ and ‘Suhani Chandni Raatein’ from Mukti,” he shares.

►
Siddhant Chaturvedi: Rocking it with a guitar, flute, mouth organ

For ’s MC Sher, learning the guitar during these jobless days meant not only adding yet another skill to his resume and bringing mental peace, but the videos which he posts on his social media also serve as an audition tape. “I want to be offered scripts revolving around a musician and do films like Rockstar. So, this is my way of putting it out in the universe and to all makers that I can play the guitar and look good doing so,” he says unabashedly. The actor has done his fair share of DJ-ing and can also play the mouth organ. “Now, I am learning the flute. There is no place in the apartment for a drum set, otherwise, I would have been a one-man band by now, but someday in the future maybe…” Siddhant says wistfully. As of now, he is playing his own creation “Dhoop”, and turning poetry into music. “I also like playing ‘Photograph’ by Ed Sheeran, Silk Route’s ‘Dooba Dooba Rehta Hoon’ and ‘Kaise Hua’ from the film Kabir Singh.”

Pulkit Samrat and Kriti Kharbanda, who have been together through the lockdown, created symphonies on a piano. “Your hands flowing on the keys, your mind focusing on the melody and your heart following the beat you set,” waxes the actor who has been practising his song, “Kaun Kenda Hai”, and playing unplugged versions of everybody’s favourite, Michael Bublé. Kriti started with “Bella Ciao”, then moved to her own song “Jogi”. “I am taking proper piano lessons online,” she asserts. Duet soon? 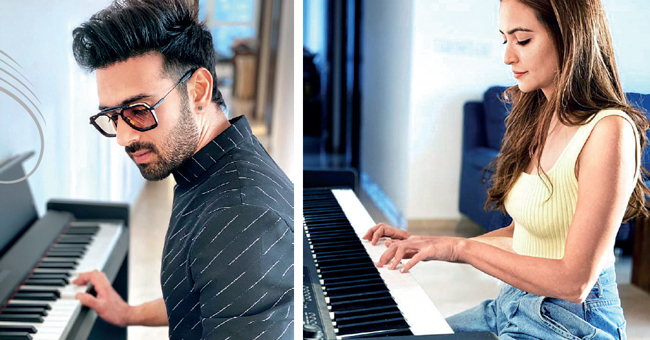 Radhika traded her time on the dance floor to make her fingers dance on the black-and-white keys of a piano. “Presently, I am learning ‘City Of Stars’ from La La Land and some old Hindi songs,” informs the actress who collaborated with on a rendition of “Lag Jaa Gale” on the social media. “The song tells us that we only have today and we have to make the most of it, much like in the present scenario,” she smiles, admitting that she often plays the tune on the piano.

►
Hrithik Roshan: Piano for the superhero

Being the perfectionist that he is, Hrithik has been diligently taking regular piano lessons online while sons Hrehaan and Hridhaan have been learning the guitar. The trio surprised his composer-uncle Rajesh Roshan with a rendition of Kailash Kher’s “Allah Ke Bande” on his birthday on May 24. 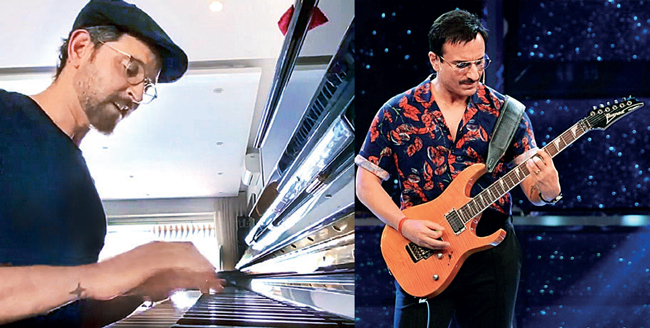 Having equated the lockdown to a “long voyage on a 19th-century ship”, Saif escaped cabin fever by challenging himself to perfect Bruno Mars’ bestselling “The Lazy Song”. What better way to describe the lockdown state of mind than the lines that go, “Today I don’t feel like doing anything, I just wanna lay in my bed…” But as he points out, “it’s a particularly difficult guitar piece to master,” so he certainly hasn’t been lazy with his music.

►
Aparshakti Khurana: On a song with his guitar

The Khurrana brothers have always been musically inclined. While Ayushmann took to the ’gram to inspire filmmakers to cast him as the Professor on Money Heist with his rendition of “Bella Ciao” on the piano, Aparshakti polished up on his guitar skills. “I took some online lessons that helped me compose music as well,” he reveals, admitting that he is partial to Punjabi folk music, and play Neha Kakkar’s “Kalla Sohna” and “Haaye Oye” by DJ Qaran the most. In fact, he will be coming out with a song real soon too.

In the company of his books

Gulzar gazes from the balcony of his Bandra home on Tuesday. Photo by Raju Shelar/MMCL

In the right place

Taimur Ali Khan was recently seen out and about in the city with daddy cool Saif Ali Khan. Both of them enjoyed their little walk as they got clicked by the paparazzi. Tim was seen wearing a yellow raincoat with a pair of grey pants and gumboots, whereas Saif was dressed in a blue T-shirt and his regular white pants. The duo also made sure that they dind’t forget to wear masks. Well, isn’t the weather truly perfect for a refreshing stroll? Photo: Yogen Shah

Actress Disha Patani was spotted in Bandra as she stepped out of home amid the coronavirus-induced lockdown. Throughout the lockdown period, Disha has been active on social media and keeps on updating her fans and followers about her days. On the work front, Disha will be next seen sharing the screen with Salman Khan in his upcoming film Radhe and in Do Villain. Now that Aditya Roy Kapoor has parted ways with Mohit Suri over creative differences, wonder who will take his place? Photo: Yogen Shah

Sooraj Pancholi was spotted in Bandra recently after a long lockdown break. After his debut with Hero and Satelite Shankar in 2019, Sooraj will next be seen playing the legendary boxer Hawa Singh. He has has Time To Dance with Isabelle Kaif on the big screen. Photo by Raju Shelar/MMCL

As things have started easing out a bit amid Unlock 2.0, Bollywood stars are also stepping out to resume their work. Actor Abhishek Bachchan was spotted in the city as he posed for a selfie with a fan. Abhishek, who made his debut with the film Refugee, completed 20 years in Bollywood on Tuesday. Sharing a special memory of the film with co-star Kareena Kapoor Khan, Abhishek said that it is a blessing and a privilege to be able to look back and recount the last 20 years.

Khiladi Kumar is back

Akshay Kumar was spotted outside a production office in Juhu on Monday. Looks like Khiladi Kumar has resumed work. On Tuesday, the release date for Akshay Kumar and Katrina Kaif’s Sooryavanshi was announced. The film will release on Diwali this year. However, Akshay’s Laxmmi Bomb is set for a digital release.

Life on the balcony

Suzanne Khan was spotted arranging balcony furniture in Hrithik Roshan’s home where she has been living since the lockdown was imposed.In March, Sussanne temporarily moved to Hrithik’s house to stay with the actor so that the duo can co-parent their children, Hrehaan and Hridhaan, amid the lockdown to battle the deadly coronavirus pandemic. Hrithik has been posting pictures on social media documenting his quarantine days and spending family time amid lockdown. The former couple has never shied away from being together for their children and has remained on good terms as close friends and co-parents since their divorce in 2014.

Katrina Kaif was spotted outside a building in Bandra that houses a gym and an ATM. This photo was taken on June 25, 2020.

Kareena Kapoor Khan, Saif Ali Khan and Taimur were spotted taking a stroll in the city as they stepped out together. Wearing a white kurta pyjama paired with blue shoes, Saif was spotted with the his family. While Bebo was dressed in a black T-shirt and white pants, the picture featured the little munchkin dressed in a cute red T-shirt with shorts and white sports shoes.

Tiger Shroff is back to work and was spotted outside a dubbing studio in Juhu in Mumbai on Wednesday.

Gabriella Demetriades takes her dog for a walk

Dressed in her workout gear, Gabriella Demetriades was clicked enjoying a day out with her dog in Mumbai suburbs.

Abhishek Bachchan was clicked post dubbing in Juhu. He will be seen in his debut web series releasing next month.

Angad Bedi looked his stylish best as he was spotted in suburban Mumbai recently.