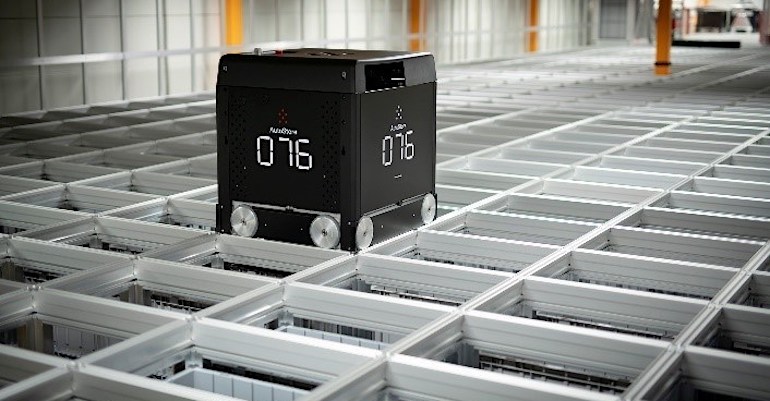 Automation and robotics company AutoStore has filed patent infringement lawsuits in the United States and the United Kingdom against Ocado Group plc, which in the U.S. provides online grocery fulfillment technology to The Kroger Co.

AutoStore claims patents for its automated storage and retrieval systems (AS/RS) are being violated by technology at the foundation of the Ocado Smart Platform, now being used in the U.K. by Ocado’s own online grocery retail operation and supermarket chains Morrisons and Marks & Spencer. The technology at issue, AutoStore said, also is being deployed by Kroger, which plans to open 20 Ocado-powered customer fulfillment centers (CFCs) in the U.S. to fill online grocery orders. Kroger also owns a roughly 6% stake in Ocado.

In the AutoStore’s system, storage bins are stacked vertically in a grid and stored in a cubic structure, with the bins retrieved by robots that travel atop of the structure. Specifically, AutoStore charges that Ocado’s OSP infringes on patents relating to AutoStore’s AS/RS robot central cavity design, arrangement of the mechanism that enables the robots to lift and place bins in their cavities and the robots’ in-wheel motors.

A Norwegian court has ruled that AutoStore is entitled to ownership of its patents covering the robots’ central cavity technology, but Ocado has continued to pursue partnerships by selling that and other AutoStore-owned technology as its own, according to AutoStore. The company said Ocado first purchased AutoStore technology in 2012.

“Since 1996, AutoStore has developed and pioneered technology that has revolutionized retail storage and order fulfillment and is driving the growth of online retail,” Karl Johan Lier, President and CEO of AutoStore, said in a statement. “Our ownership of the technology at the heart of Ocado’s warehousing system is clear. We will not tolerate Ocado’s continued infringement of our intellectual property rights in its effort to boost its growth and attempt to transform itself into a global technology company.” 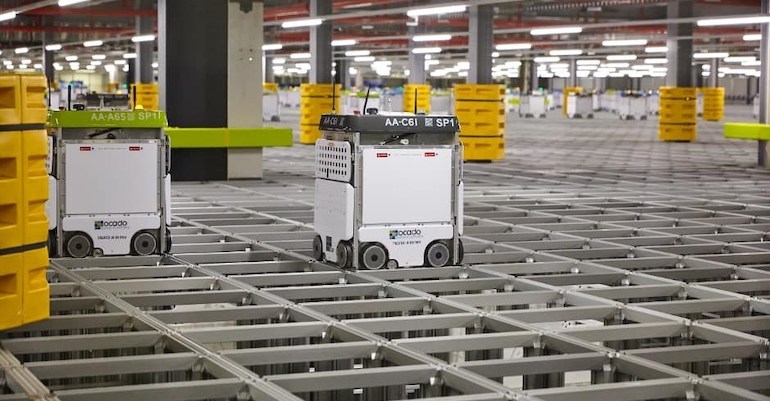 AutoStore claims patents for its automated storage and retrieval systems are being infringed by technology at the foundation of the Ocado Smart Platform, shown above.

In a statement, Ocado said AutoStore’s press announcement of the suit “is the first we have heard of this new claim” and that it “has not received any papers in relation to these claims.”

“We are not aware of any infringement of any valid AutoStore rights and, of course, we will investigate any claims once we receive further detail,” Ocado stated. “We have multiple patents protecting the use of our systems in grocery, and we are investigating whether AutoStore has or intends to infringe those patents. We will always vigorously protect our intellectual property.”

AutoStore said it currently supports more than 500 installations and 18,000 robots across 30 countries, serving markets ranging from grocery and health care to aviation via clients such as Asda (U.K.), Best Buy (U.S.) and Lufthansa (Germany). Also in the U.S., AutoStore’s cube storage and retrieval system is earmarked for planned H-E-B micro-fulfillment centers powered by Swisslog’s SynQ software and pick stations.

Canadian grocer Sobeys Inc., part of Empire Company Ltd., has opened an Ocado CFC in Vaughan, Ontario, that powers its new Voilà online grocery service, launched in June in the greater Toronto area. Three more Ocado CFCs are slated to be built, including one in Montreal and two in Western Canada.

Other Ocado food retail users include Groupe Casino in France, which in late March opened the first Ocado-driven warehouse outside of the U.K., as well as ICA Group in Sweden, Bon Preu Group in Spain, Aeon in Japan and Coles Supermarkets in Australia.