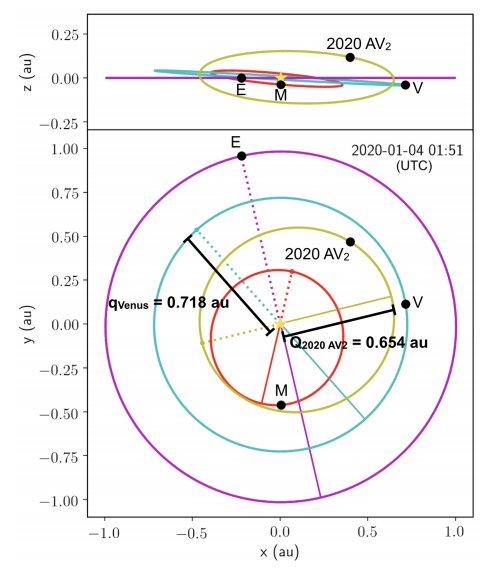 Astronomers have painstakingly built models of the asteroid population, and those models predict that there will be ~1 km-sized asteroids that orbit closer to the sun than Venus does. The problem is, nobody’s been able to find one—until now.

Astronomers working with the Zwicky Transient Facility say they’ve finally found one. But this one’s bigger than predictions, at about 2 km. If its existence can be confirmed, then asteroid population models may have to be updated.

A new paper presenting this result is up on arxiv.org, a pre-press publication site. It’s titled “A kilometer-scale asteroid inside Venus’s orbit.” The lead author is Dr. Wing-Huen Ip, a professor of astronomy at the Institute of Astronomy, National Central University, Taiwan.

The newly discovered asteroid is named 2020 AV2. It has an aphelion distance of only 0.65 astronomical units, and is about 2 km in diameter. Its discovery is surprising since models predict no asteroids this large inside Venus’ orbit. It could be evidence of a new population of asteroids, or it could just be the largest of its population.

The authors write, “If this discovery is not a statistical fluke, then 2020 AV2 may come from a yet undiscovered source population of asteroids interior to Venus, and currently favored asteroid population models may need to be adjusted.”

There are about 1 million known asteroids, and the vast majority of them are well outside Earth’s orbit. There are only a tiny fraction located with their entire orbits inside Earth’s. Models predict that an even smaller number of asteroids should be inside Venus’ orbit. Those asteroids are called Vatiras.

Near the end of January, astronomers used the Keck Telescope for spectroscopic observations of the rock. That data shows that the asteroid came from the inner region of the main asteroid belt, between Mars and Jupiter. “These data favor a silicate S-type asteroid-like composition consistent with an origin from the inner Main Belt where S-type asteroids are the most plentiful.” They add that it agrees with Near Earth Asteroid (NEA) models that “…predict asteroids with the orbital elements of 2020 AV2 should originate from the inner Main Belt.”

2020 AV2 is either a model buster or a model confirmer. “NEA population models predict

The authors thought through two scenarios involving 2020 AV2’s detection, and what it means. “Despite its low probability, a possible explanation for our detection of 2020 AV2 is a random chance discovery from the nearEarth asteroid population,” they write. “However,” they continue, “history has shown that the first detection of a new class of objects is usually indicative of another source population c.f., such as the Kuiper Belt with the discovery of the first Kuiper Belt Objects 1992 QB1 and 1993 FW.”

There’s also a possibility that 2020 AV2 didn’t originate in the main asteroid belt. Models show that there’s a region inside Mercury’s orbit that could have spawned asteroids, and where they might still reside. “…2020 AV2 could have originated from a source of asteroids located closer to the sun, such as near the stability regions located inside the orbit of Mercury at ~0.1-0.2 au, where large asteroids could have formed and survived on time scales of the age of the solar system.”

2020 AV2 might not spend an eternity on its present orbit. The team of researchers performed some simulations, and they show that the asteroid could be ejected from the solar system entirely. “… dynamical N-body simulations of 2020 AV2 indicate that its orbit is stable on ~10 Myr timescales, entering into temporary resonances with the terrestrial planets and Jupiter before its orbit evolves onto close-encounter paths with the gas giant, leading to its eventual ejection from the solar system.”

When 2020 AV2 was first discovered, scientists wondered at the journey it must have taken to get there. They also wondered about is eventual fate. “Getting past the orbit of Venus must have been challenging,” said George Helou, executive director of the IPAC astronomy center at Caltech and a ZTF co-investigator, in a press release. Helou explained that the asteroid must have migrated in toward Venus from farther out in the solar system. “The only way it will ever get out of its orbit is if it gets flung out via a gravitational encounter with Mercury or Venus, but more likely it will end up crashing on one of those two planets.”

If this discovery is just the first of a whole population of asteroids inside Venus’ orbit, the majority of them will all share the same fate. After about 10 to 20 million years, they’ll all be ejected.