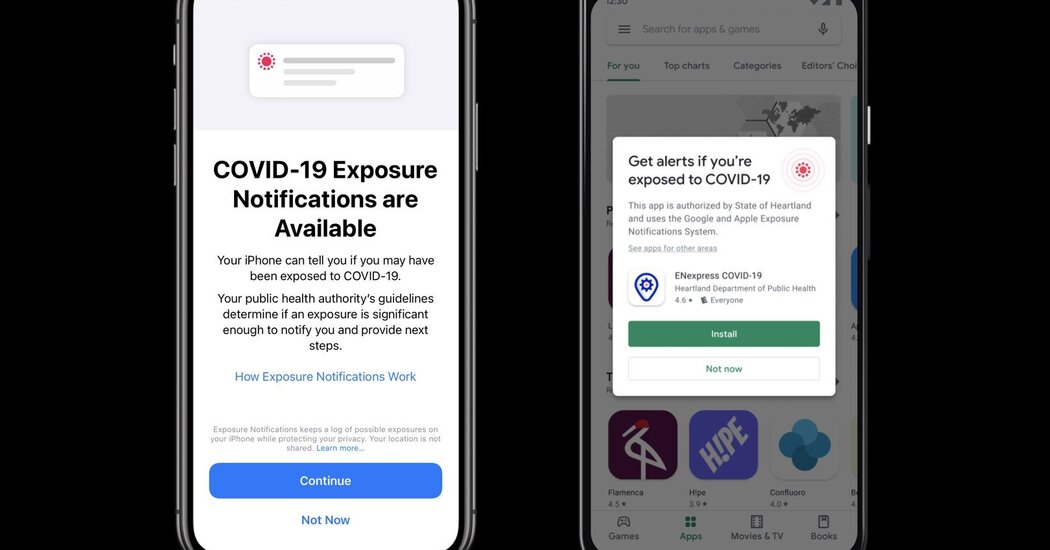 Several state governments may soon send residents an alert asking them to turn on “exposure notifications.”

On Tuesday, Apple and Google said they would make it easier for states to use their new technology that detects phones that come close to one another and can notify people who may have been exposed to the coronavirus.

States that sign on will be able to send a notice directly to smartphones asking people to opt in to the technology. Previous versions of the technology had required people to seek out a state health agency’s app.

The new approach could spur the popularity of such virus alert technology in the United States by significantly lowering the hurdles for its use. Maryland, Virginia, Nevada and Washington, D.C., already plan to use the new system, Apple and Google said, and about 25 other states were exploring using the earlier app version.

In April, Apple and Google announced they were developing the technology, which uses Bluetooth signals to enable iPhones and Android devices to detect nearby phones. If someone using the technology tests positive for the virus, that person can enter the positive result into the system using a unique authentication code. An automatic notification would then go to other phones that had opted in and had been in close contact.

As the pandemic took hold this spring, countries around the world raced to deploy virus apps to help track and quarantine people. But some of the apps were mandatory and invasive, sending users’ locations and health details to their governments. Many apps were also rife with security flaws.

The Apple-Google technology, by contrast, does not collect personal health details or track users’ locations. That has made the system attractive in Europe and elsewhere. Germany, Denmark and Ireland have already released apps using the technology, and millions of people in Europe have downloaded them.

In the United States, public health agencies in Virginia, Arizona, Nevada, Alabama, North Dakota and Wyoming have also created such apps, although the uptake has been slower. The Alabama app, released in mid-August, has had about 44,000 downloads.

To make the virus alert apps from different U.S. states interoperable, the Association of Public Health Laboratories announced in July that it would host a national server for the data. That means users of Alabama’s app may someday be able to detect nearby phones when they travel to Virginia and vice versa.

Now, to use Apple and Google’s technology, state public-health authorities simply need to provide certain parameters to the companies, such as how close people need to be to trigger an exposure notification and recommendations for those with possible exposures. Google would then create an app for the state, while Apple would enable the technology on the iPhone software. The system would then use approximate location data to send an alert to residents’ phones in that state, asking if they would like to enroll. (On iPhones, enrolling requires tapping a button, while Android users are prompted to download the state’s app.)

Google initially required Android users of the virus alert apps to turn on location services, which could have allowed Google to collect their location data. After health officials in Europe complained, Google said it would stop requiring location services to be on to enable the apps.

Still, security researchers have warned that the technology could also be misused to send false alerts, spreading unnecessary alarm. While they acknowledged the companies’ desire to help stem the pandemic, a few said they were troubled by Apple’s and Google’s power to set global standards for public health agencies.

Ashkan Soltani, an independent security researcher, also warned that the companies could at some point turn on virus notifications by default. “I continue to worry about rapidly deploying a new technology to nearly everyone’s device,” he said, “especially when the decision to do so isn’t done by policymakers but unilaterally by these platforms.”