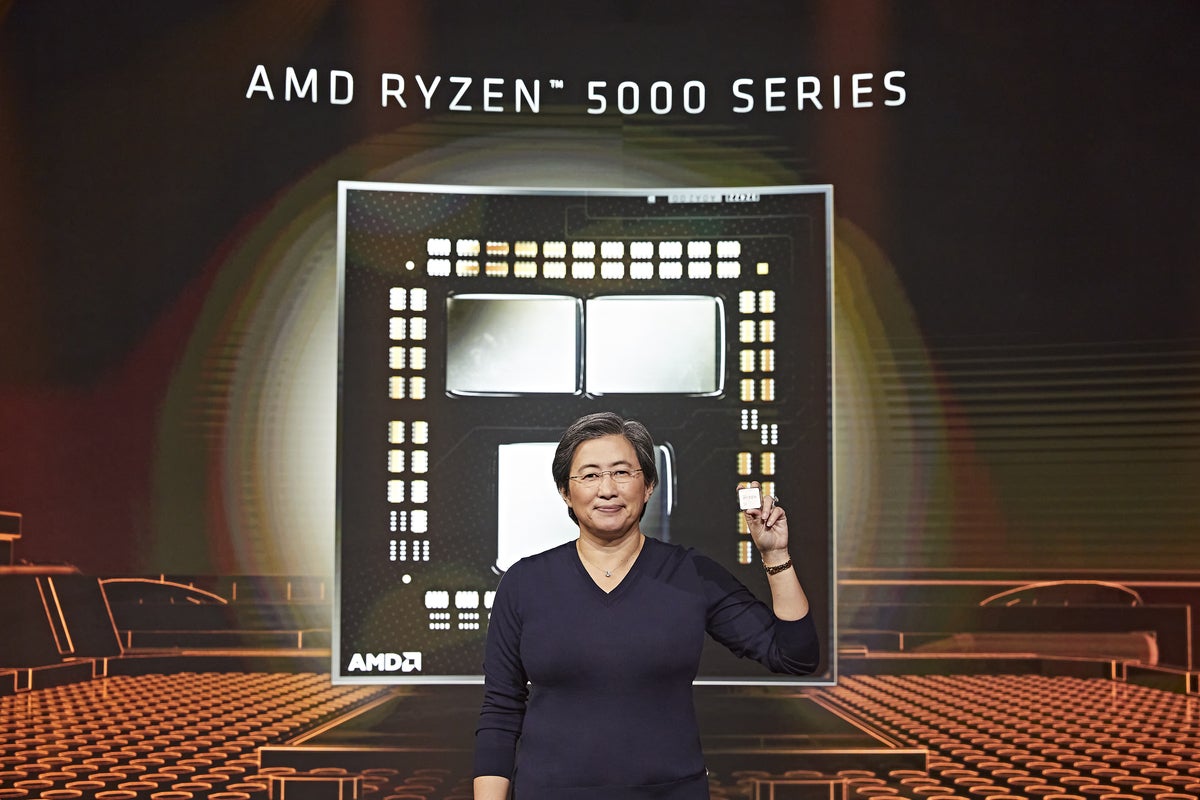 AMD’s highly anticipated Zen 3 made its debut on Thursday with four new Ryzen 5000 CPUs that aim to snatch the gaming crown from Intel. You won’t even have to wait that long, as AMD said the AM4-based CPUs will all go on sale on November 5.

The four models released are:

Although the chips are built on the same TSMC 7nm process as the Ryzen 3000-series, AMD said it has squeezed more boost clocks plus an impressive 19 percent more instructions-per-clock efficiency out of the new cores in testing against the previous Zen 2 cores. The company cited improvements such as cache, execution, branch prediction, and load/store for upping the efficiency overall.

The other gain comes from the design of the Ryzen 5000 chips. AMD’s previous Ryzen 3000 chips were built on a base structure of four compute cores. The new Zen 3 chips are built with up to 8 compute cores on a single die, resulting in greatly reduced latency between cores compared to the older design. With the new design, all 8 cores on a die now share the same L3 cache and help boost the Ryzen 9 5900X past its bitter enemy in gaming.

Perhaps more telling is the performance of the Ryzen 9 5900X in Far Cry: New Dawn, where the Zen 3 chip is basically 2 percent faster. You may think 2 percent isn’t impressive—but that’s one title particularly indicative of the “Ryzen gap” that has long plagued AMD in gaming.

The Ryzen gap would typically cause AMD to be 10 to 20 percent slower than an Intel chip at games not limited by the GPU performance. It’s been there since the first Ryzen 7 1800X and has persisted through Ryzen 2000 and Ryzen 3000. AMD’s new Zen 3, however, may finally have closed that gap.

That’s really bad news for Intel’s desktop CPUs, which have been hanging by a thread for years now. The one refuge Intel has had is gaming performance. If AMD’s claims are true, it leaves consumers with little reason to buy an Intel CPU anymore.

Ryzen exceeds Intel in other areas, too, according to AMD. The company said the new Ryzen 9 5900X is the first consumer desktop chip to break the 600 mark in Maxon’s Cinebench R20 test in single-threaded performance, with a score of 631. Intel’s best, the Core i9-10900K, scores 544.

AMD said the chip is great for both gaming and content creation. Compared to the 16-core Ryzen 9 3950X, AMD said the Ryzen 9 5900X offers improvement benefits from 5 percent to 27 percent, with the greatest upticks in gaming. Again, you can see that Ryzen gap where the Zen 3 outperforms the Zen 2 by largely double digits.

Against the 10-core Core i9-10900K, the benefits depend largely on the application. Adobe Premiere, for example, sees the Ryzen 9 5900X about 13 percent faster. In the V-Ray rendering benchmark that taps more CPU cores, however, it’s about 59 percent faster.

In gaming, AMD showed off the new Ryzen 9 5900X either tied or ahead by single-digit percentage increases in performance against the Core i9-10900K.

AMD further stressed that its new Zen 3 chips lead in power efficiency, which is admittedly a little less pressing for desktops than it is for laptops, Compared to the original Ryzen 7 1800X, a new Zen Ryzen 9 offers up a 2.4X increase in performance per watt. It’s even greater against Intel’s Core i9, with power efficiency 2.8X better than that of a Core i9-10900K chip.

“This is a big, big moment for us as a company, and for a lot of us personally,” said AMD technical marketing manager Robert Hallock in a briefing with reporters.

Hallock compared the Ryzen 5000 series to the company’s prior success with Athlon 64, when AMD was firing on all cylinders. “Those times are here again,” Hallock said. “We are about to release a product that has full-spectrum, total coverage leadership of every sort of performance metric that a gamer, that a PC enthusiast would want a desktop CPU to offer. And we’re the only ones doing it right now.”

The last surprise of the day came from a reveal of AMD’s new Radeon RX 6000-series GPU and some preview performance. AMD said the new GPU—long called “Big Navi”—can run Borderlands, Call of Duty: Modern Warfare and Gears of War 5 all set to their maximum settings and well above the 60fps threshold many gamers demand, at 4K resolution. AMD said it tested the new RX 6000-series card on a new AMD Ryzen 9 5900X naturally. The preview numbers would indicate the new Radeon is competitive with Nvidia’s well-received GeForce RTX 3080 graphics card. We have an analysis of just what the Radeon RX 6000’s impressive numbers portend here.