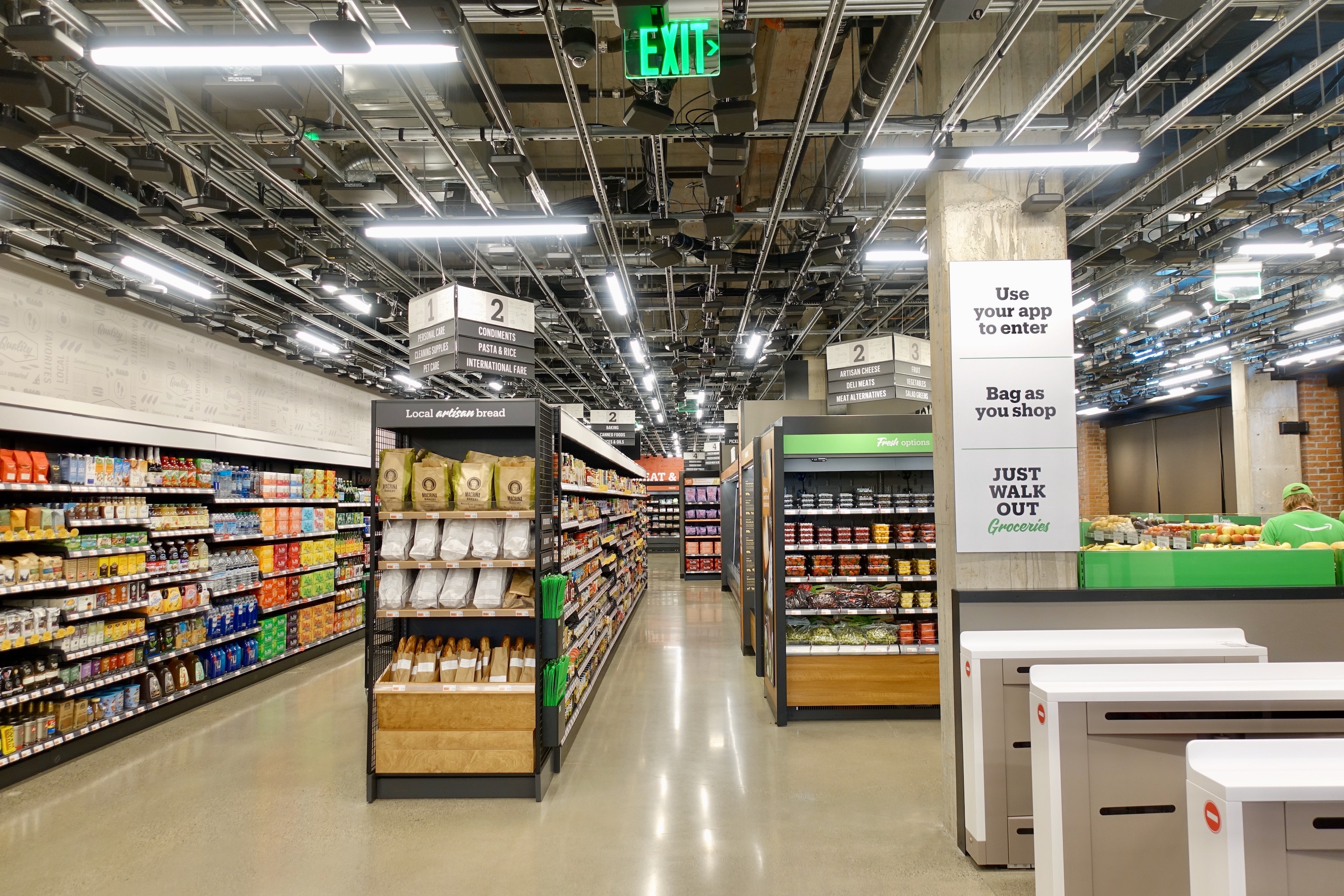 Amazon is opening its second Amazon Go Grocery store Wednesday, this one in Redmond, Wash., bringing its larger cashierless store format to the Seattle suburbs and the doorstep of Microsoft’s headquarters.

The 7,350-square-foot store is located in the Overlake Fashion Plaza at 2010 148th Ave. N.E. The opening comes about six months after Amazon opened the first Go Grocery in Seattle’s Capitol Hill neighborhood.

The stores are an expansion of the high-tech shopping experience first ushered in by the smaller Go convenience stores two years ago. Amazon Go Grocery stocks many of the items found in full-size grocery stores but uses an array of cameras and sensors to log what people put in their carts as they shop, eliminating checkout lines.

While the new store may attract shoppers who work at Microsoft, the location is also notable because Microsoft is not shy about also wanting to “redefine the shopping experience” through technology. The software giant has teamed with Kroger on projects including on a high-tech QFC store in Redmond, which features smart shelves and handheld devices to bring greater efficiency to grocery shopping, pricing, stocking and in-store advertising.

This Amazon Go Grocery will differ from the first location by offering a selection of hot food items prepared in a kitchen on site. Breakfast, lunch, and dinner food items will include breakfast wraps and oatmeal, soups, hot sandwiches, pizza by the slice, rotisserie chicken, chicken wings and BBQ ribs.

The Redmond store is also catering more heavily to parents on the go with expanded baby products such as diapers, wipes, food, and other supplies.

Elsewhere in the store, the idea is to provide a version of what full-size grocery stores offer, including essential items, fresh produce, meat and seafood, baked goods, alcohol and ready-to-heat pre-made meals.

Just last month, Amazon unveiled another concept in its ongoing expansion of physical retail offerings with the opening of Amazon Fresh Grocery in Woodland Hills, Calif. That type of store does not rely on the elaborate infrastructure and surveillance-style shopping that Amazon Go uses. Instead, Amazon rolled out a smart shopping cart that uses cameras, sensors and a scale to automatically detect and log items on a digital display. The technology still makes it possible for shoppers to leave the store without going through a traditional checkout line.

Groceries are an estimated $678 billion U.S. market, and as they go increasingly digital, Amazon continues to invest heavily in both physical and online options three years after acquiring Whole Foods for nearly $14 billion in 2017. The company saw online grocery sales triple year-over-year during the second quarter of this year as more customers get their groceries delivered versus going to a physical store amid the COVID-19 pandemic.

In October, Amazon made grocery delivery a built-in benefit of Prime membership — no longer charging an extra $15 per month, or $180 per year, for Amazon Fresh delivery on top of the $119 annual Prime fee.

Whole Foods opened a delivery only facility in Brooklyn this month for the purpose of fulfilling online orders.

The New York Post reported in August that Amazon is looking to bring the “Just Walk Out” tech that fuels Go stores to Whole Foods. A source told the newspaper the rollout of the technology to the bigger chain is expected to begin in the second quarter of 2021.

The Seattle and Redmond locations are the only two listed on the Amazon Go Grocery website right now, but previous reports say that a location is planned for the Washington, D.C., metro area.

During the opening of the Seattle Go Grocery, Amazon stressed that its intention is not to replace Whole Foods or other methods shoppers use to get groceries, and that customers like to shop in a variety of ways. While Go might be aimed at people near the office, Go Grocery is catering to people closer to home.