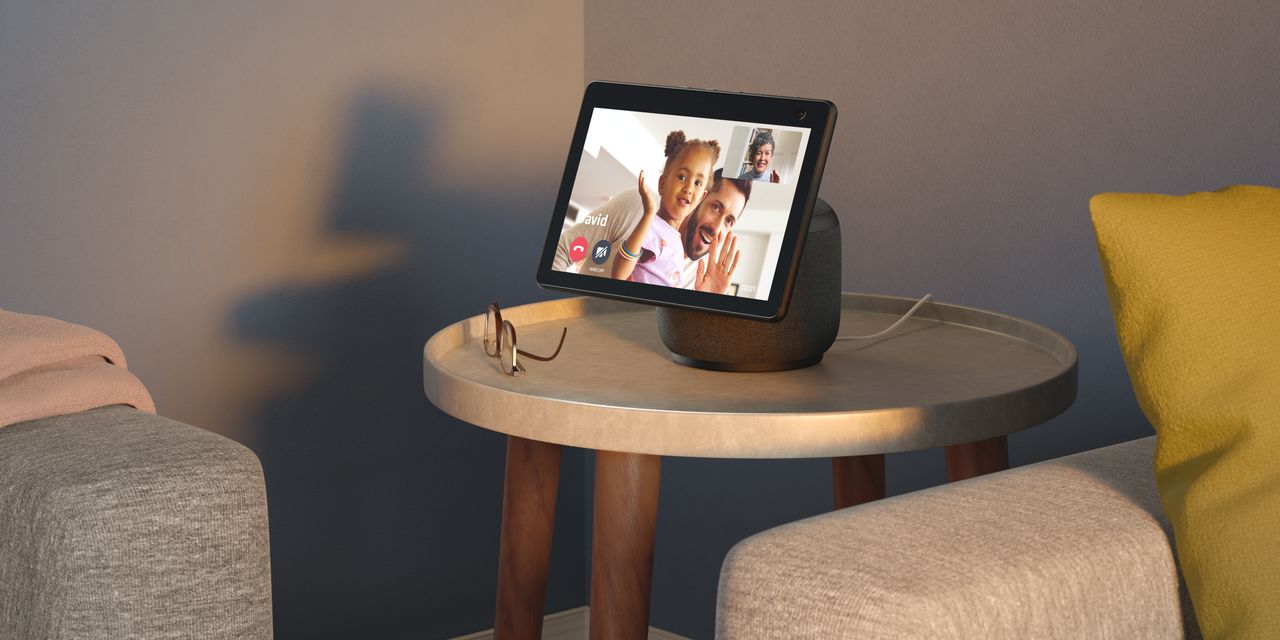 com Inc. on Thursday rolled out an array of speaker and security devices centered around the home and a gaming subscription service and controller, offerings tailor-made for the coronavirus era.

The devices include a home-camera drone, a pivoting speaker with a camera, a car alarm, a car camera, a cloud-connected gaming controller and a number of other products and services.

The company unveiled new features for some existing products such as using a television as a video-calling device with the Fire TV media player and updated functions for its Alexa voice assistant. Alexa now has the ability to read books to children or detect if a baby is crying. It can also ask users to clarify questions to “get smarter,” Amazon says.

A new Alexa security feature named Guard Plus will be able to detect sounds of activity around a customer’s home when they are away and trigger dog-barking or other noises to deter potential intruders.

“Our homes have become our offices, our classrooms, movie theaters and more,” David Limp, Amazon’s head of devices and services, said during the virtual event. “We believe that our homes are made better by technology—technology that you don’t have to learn and works well for everybody, whenever and wherever you are.”

and a handful of others in giving people the ability to stream videogames over the internet. Called Luna, it will be accessible via computers, mobile devices and Fire TV and will initially cost $5.99 a month. The service comes with a library of more than 50 mostly older games and an option to purchase a $50 custom controller. People in most of the U.S. can request early access to the service beginning Thursday.

Cloud gaming is a nascent market made up of only a few major players. The appeal of the technology is that it enables people to instantly access games, with no downloading required or the need to invest in a console or high-end PC. But so far analysts say adoption appears to be minimal. An official launch date for Luna wasn’t disclosed.

Amazon showed off a flying security camera named Always Home Cam that it said will fly automatically to predetermined areas of a home. The camera, which will cost $249, will turn on only when it is operating, Amazon said. An executive said the drone was meant for users who may not want a camera in an area like a bedroom all the time, but would want it in certain scenarios such as when they’re not home.

The company also revealed a new car camera and car alarm with sensors to monitor potential break-ins. The alarm that includes a camera, which costs $199.99, will begin recording if a user says “Alexa, I’m being pulled over.” Amazon said its car alarm can sync with its Ring security system and is able to trigger cameras and sirens. Video from its Ring devices will be encrypted.

“It really is in response to what we believe our customers want,” Leila Rouhi, president of Ring, said in an interview. “When something happens, you want to be able to record right away and not necessarily have to be fumbling around with your device. And we believe that feature really addresses that desire of our customers.”

Amazon will sell a new lineup of Echo smart speakers made of eco-friendly materials which have a low-power mode to make them more energy efficient. Starting at $99.99 for its flagship model, the company is also making smaller speakers including a device with a clock and a version for children with a tiger or panda design.

Amazon uses its hardware event to showcase an array of products and services featuring Alexa or internet-connected devices often used for home security and surveillance. This approach differs greatly from that of competitors such as

which typically announces fewer than a handful of new products at its events.

What new Amazon products interest you the most? Join the conversation below.

To extend its reach in certain markets, Amazon has undercut rivals in the past with sales and discounts for its devices and hardware, occasionally selling products at cost to gain acceptance among customers. The company has also used its hardware offerings to steer consumers toward services such as a Prime membership.

Amazon’s Echo Buds, for example, are priced at $129.99, although the company at times has sold them for $89.99. Apple’s cheapest AirPods retail at $159.99, although they sometimes sell at a discount as well. The AirPods, however, have been more popular and accounted for nearly half of all sales of wireless earbuds in 2019, according to Counterpoint Research.

Amazon’s strategy puts less pressure on the company to establish hardware hits compared with Apple, said Gene Munster, an analyst at Loup Ventures, a venture-capital firm specializing in tech research. The company is searching for its next big hit after its Echo smart speakers were unveiled in 2014.

“Amazon takes these events as opportunities to basically do market research about a product’s viability,” he said. “Amazon isn’t held to the same hardware standard as a company like Apple, so they have more flexibility to experiment. Alexa began as an experiment.”

Amazon has sought to integrate Alexa into as many products as possible and experimented greatly with that goal. Last year’s event, which was highlighted by the Alexa-enabled Echo Buds, also included announcements for eye frames and a finger ring featuring Alexa that the company has only made available to select customers.

There are few consumer categories in which Amazon is absent. In late August, the company revealed a health and wellness tracker named Halo that the company said tracks users’ body-fat percentage, heart rate, sleep and emotions. The band is retailing at $64.99, but the price will rise to $99.99 after the initial rollout.

In recent years, the retailer has pushed itself further into the smart-home and security industries. Much of that effort has centered around its popular but controversial Ring cameras. As of the second quarter of this year, Amazon was the top vendor by shipments in both the smart-speaker and video-doorbell categories, according to Strategy Analytics.

Amazon has received backlash for partnering with hundreds of police departments and allowing them potential access to users’ camera footage. The company in June said it was pausing law-enforcement use of its facial-recognition software for a year to allow Congress to implement regulatory measures around the use of the technology.

—Sarah Needleman contributed to this article.