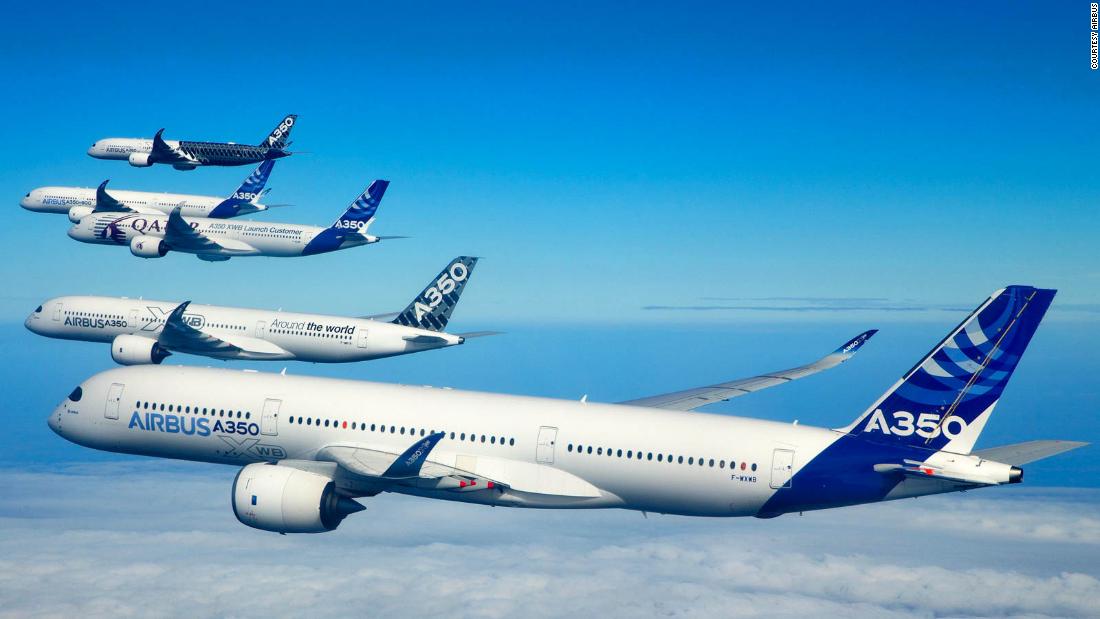 (CNN) — Birds are the undisputed masters of aerodynamics.

No matter how many supercomputers and wind tunnels scientists throw at solving flight’s thorny calculations, they’ll never match the perfection of airborne avians.

A focused peregrine falcon diving on its prey, a pair of feisty hummingbirds in a territorial dogfight, or a huge albatross soaring effortlessly for days over the ocean are the envy of aerodynamicists and pilots.

The airborne cacophony of a huge flock of geese, honking away while flying in a perfect “V” formation, is a wonder to see and hear.

Those formations have also provided the inspiration for researchers at Airbus UpNext, the aircraft manufacturer’s future-flight demonstration and technology incubator.

As far back as a century ago, avian scientists began to understand that birds were increasing aerodynamic efficiencies by flying in close formation, taking advantage of the changed airflow in each bird’s wake.

With that in mind, the Airbus fello’fly flight demonstration project will fly two large commercial aircraft in formation, looking to mimic the energy savings of our feathered friends.

Building on test flights in 2016 with an Airbus A380 megajet and A350-900 wide-body jetliner, fello’fly hopes to demonstrate and quantify the aerodynamic efficiencies while developing in-flight operational procedures.

Initial flight testing with two A350s began in March 2020. The program will be expanded next year to include the involvement of Frenchbee and SAS airlines, along with air traffic control and air navigation service providers from France, the UK, and Europe.

“It’s very, very different from what the military would call formation flight. It’s really nothing to do with close formation,” explained Dr. Sandra Bour Schaeffer, CEO of Airbus UpNext, in an interview with CNN Travel.

Birds fly in a “V” formation to increase aerodynamic efficencies.

An aircraft in flight sheds a core of rotating air from the end of its wings, known as a “wingtip vortex.”

Extremely powerful vortices — especially those generated by a large aircraft — have been known to flip smaller planes that have encountered the horizontal tornado of air streaming behind.

Avoiding wake turbulence is part of a student pilot’s curriculum, as it will be in the fello’fly demonstration. “Pilots are trained to not fly into the vortex of a preceding aircraft,” said Bour Schaeffer, an experienced flight-test engineer.

“They will be 1 1/2 to 2 nautical miles away from the leading aircraft, and slightly offset, which means they are on the side of the vortex. It’s no longer the vortex, it’s the smooth current of rotating air which is next to the vortex, and we use the updraft of this air.”

Taking advantage of the free lift in this updraft of air is called “wake-energy retrieval.” Bour Schaeffer says that upcoming flight trials using two A350s could prove that on long-haul flights, fuel savings of between 5% and 10% may be achieved, “which is an enormous number. This is the reason why we want to accelerate it. It is not a product today, but it is something we strongly believe in.”

While it may seem simple to just watch a flock of birds to figure out the aerodynamics of their energy-saving flight, it really isn’t.

“Birds have been doing this for millions of years, but the disadvantage we have is that we can’t do controlled experiments very easily,” said Dr. Charles Bishop, of the School of Natural Sciences, Bangor University, in Gwynedd, Wales.

However, Bishop cited a landmark 2001 paper in weekly international journal Nature by Henri Weimerskirch, where the researcher and his team had access to tame pelicans — known in the birding community as the best at formation flight, even better than geese or swans.

“Their study is technically the only one that shows direct evidence of energetic advantage rather than theoretical calculations in aerodynamics.”

Weimerskirch was able to put heart rate monitors on the birds, and according to Bishop, the trailing pelicans in the formation clearly saved energy.

“They had a 14% drop in heart rate, and they also glided more. They were finding it easy [to fly] with this aerodynamic advantage.”

And just like the pelicans, the pilots of the trailing A350 in the fello’fly test will position the aircraft to optimize the effect of the upwash — but that points to one of the challenges facing the research team.

“You can’t see the wake, so you just can’t say ‘Ah, I’m in the right spot,'” said Bour Schaeffer. “We need to provide assistance to the pilot to position the aircraft properly.”

Once in the upwash, autoflight systems will be required to maintain the correct position, reducing the workload on the pilots and ensuring a smooth ride for passengers by avoiding the more turbulent components of the wake.

Procedures to enable the two aircraft to coordinate their position will be tested — much like during an aerial refueling mission.

“We need to make sure we can do the joining safely. We will have no compromise on safety, whatsoever,” said Bour Schaeffer.

Once the wake energy retrieval concept is proven out, operational and financial considerations will still have to be solved.

According to Bour Schaeffer, air traffic service providers and government aviation agencies will need to be convinced to change regulations to allow for much closer aircraft separation standards than what are currently in place.

Flight planning procedures will have to be developed for planes to match routes with other aircraft, along with positions and altitudes to begin a formation flight.

And a process to share the savings in fuel costs amongst airlines will be a priority.

“We know there are questions. Our aim as a demonstrator is to find answers to those questions.”

Howard Slutsken is a regular contributor to aviation magazines and blogs, and is based in Vancouver BC.