A New Front in the Biden-Trump Battle for the Suburbs: Wildfires 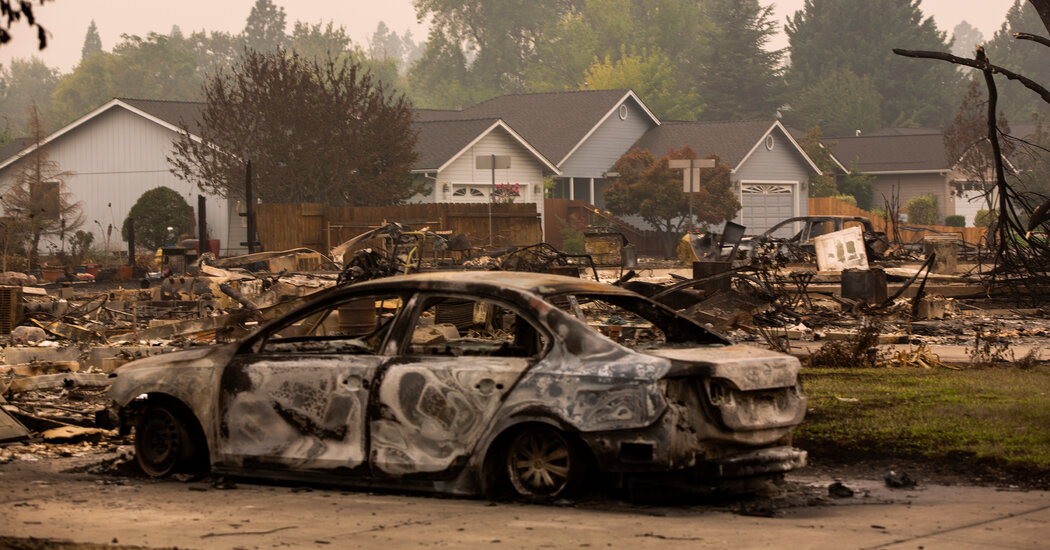 LOS ANGELES — The explosion of wildfires across the West has opened a new battleground in the critical competition for suburban voters between President Trump and Joseph R. Biden Jr., with growing evidence that climate change is an acute concern for many Americans, particularly women, viewing the nightly images of destruction and thick blankets of acrid air.

Mr. Trump has sought to combat his sharp decline among suburban voters by asserting that Democratic control of the White House would be a threat to the safety of the suburbs, raising the specter of crime, rioting and an “invasion” of low-income housing that many view as seeking to stoke racist fears.

But Mr. Biden, the Democratic presidential nominee, is seeking to redefine what “safety” means for an electorate swept by fear amid a pandemic, social unrest in the streets and now deadly wildfires. He is casting climate change as a more real and immediate threat to the suburbs than the violence portrayed in Mr. Trump’s ads and public remarks, seizing in a speech on Monday on the devastating fires ripping through forests, destroying homes and taking lives.

Mr. Biden’s speech came as Mr. Trump paid a last-minute trip to California to meet with officials struggling with the catastrophe, and disputed their assertion that there was any connection between the fires sweeping the state and climate change.

The developments suggest that an issue that has always been on the sidelines in national presidential campaigns — and had seemed eclipsed this time by the pandemic and social unrest — may be coming to the forefront with only seven weeks until Election Day.

For at least some suburban voters, particularly those who live in the West, the threat of losing their homes to fire or the health risks to their families of skies clouded with smoke seem more immediate than the social unrest spotlighted by Mr. Trump in his speeches and advertisements.

“We’re not seeing changes in crime,” said Representative Katie Porter of California, a Democrat who represents a once solidly Republican district in Orange County. “People are trying to stay home, trying to stay safe.”

More broadly, the fires in the West — and Mr. Trump’s “it’ll start getting cooler, you just watch” disparagement of climate science during his visit to California — have reinforced the perception of the president as anti-science, particularly after his open skepticism toward experts advising him to act more aggressively against the Covid-19 pandemic.

“Those fires in the West are obviously blue states and most of the country is not experiencing it,” said Anna Greenberg, a Democratic pollster. “But it is a reminder for a lot of people — especially for these better educated suburban voters who he thought would react to law and order — of how he is against science.”

Rob Stutzman, a California-based Republican strategist critical of Mr. Trump, said the swing suburban voters who delivered Democrats the House of Representative in 2018 were “repulsed by the way the president talks about climate” specifically and science generally.

“I don’t think these suburban voters are going to become climate change voters in 2020,” Mr. Stutzman said, “but the discussion around all of this highlights this Trump Neanderthalism that is offensive to them.”

The importance of the battle was underscored again on Tuesday as Senator Kamala Harris, Mr. Biden’s running mate, returned to assess the damage to her home state, meeting with Gov. Gavin Newsom near Fresno and examining the rubble of a home and a school playground destroyed in the Creek Fire.

The wildfires have helped to illustrate a critical difference between the Trump White House and a potential Biden presidency. And Mr. Biden signaled what is emerging as a pivotal competition — to define the biggest looming threats to the nation, and particularly to people living in the suburbs — as the candidates approach three debates.

“Donald Trump warns that integration is threatening our suburbs. That’s ridiculous,” Mr. Biden said on Monday. “But you know what’s actually threatening our suburbs? Wildfires are burning the suburbs in the West. Floods are wiping out suburban neighborhoods in the Midwest. Hurricanes are imperiling suburban life along our coasts.”

In an election in which the gender gap was already a severe problem for the president — with polls showing women supporting Mr. Biden in far greater numbers than men — a renewed focus on climate could prove politically problematic for Mr. Trump’s efforts to win over a voting bloc he memorably has labeled “the ‘suburban housewife.’”

“Women are much more concerned than men,” said Edward Maibach, director of George Mason University’s Center for Climate Change Communication. “The one holdout group in American not concerned about climate change are conservative white men.”

In a survey earlier this year, the Pew Research Center found Republican women were more supportive of addressing climate change than their male counterparts. For instance, 47 percent of Republican women said the government was doing too little to protect air quality, compared with only 32 percent of Republican men. There were similar splits on addressing water quality, emissions restrictions on power plants and tougher fuel-efficiency standards.

“To the extent there is a swing vote in this election, it’s a lot of Republican-leaning women, many of whom are in the suburbs,” said John D. Podesta, a top adviser to former President Barack Obama on climate change who also served as Hillary Clinton’s campaign chairman. “And this is an issue they care about.”

Another Pew poll released last month showed 69 percent of people in the suburbs said climate change would be at least somewhat important in determining their 2020 vote, with 41 percent calling it very important.

The fires and the hazardous air they have produced have so far been concentrated in Democratic parts of the nation, and, with the exception of Arizona, are not highlighted on the campaign battleground maps in the Biden and Trump headquarters.

But Mr. Biden’s advisers, as well as environmentalists who have watched in frustration for years as their issues were relegated to the back of a drawer, believe that the sheer destruction of the fires has further elevated this into a powerful issue.

That is especially true in a season of hurricanes, dramatic temperature fluctuations and wild weather in other parts of the country. As the fires raged, the Gulf Coast was preparing for the arrival of Hurricane Sally and the torrential rains and flooding it would bring.

Mr. Biden has notably framed climate change as one of four simultaneous crises facing the nation, along with the pandemic, the economic downturn and the reckoning over race and policing.

“For the first time, the average American is likely to see climate change as a here, now, us problem,” said Mr. Maibach, who studies public opinion on the environment.

“They saw it as a distant problem,” Mr. Maibach said of voters previously. “Distant in time — maybe 2100 but not today. Distant in space — maybe Bangladesh and not Boston. And distant in species — polar bears, for sure, but not people.”

The climate change debate reflects what has been another critical difference between these two candidates: The value they placed on science-based data. Once again, as with the Covid-19 pandemic, Mr. Trump is denying the assertions of scientists as he seeks to minimize a threat to the nation’s well-being.

That emphasis could face a backlash among suburban voters: 84 percent of suburbanites said in an NPR/PBS NewsHour/Marist College poll last month that they trusted public health experts to provide accurate information on the coronavirus, considerably more than people living in other areas. And just 23 percent of suburbanites said they trusted Mr. Trump’s statements on the virus, the lowest of any geographic group.

Ms. Porter, who is one of the freshman suburban Democrats elected in 2018, said that she had seen a huge change in the political environmental since Mr. Trump was elected president.

“You now need to explicitly address climate change,” she said. “And this is an important change from like four years ago.”

Mr. Podesta argued that while Mr. Trump has sought to turn climate change into a “culture war issue of the elite versus regular people” — by linking Mr. Biden to aggressive policy proposals like the Green New Deal — that has backfired in the face of the raging wildfires.

“Guess what,” Mr. Podesta said, “the regular people are fleeing for their lives in Oregon.”