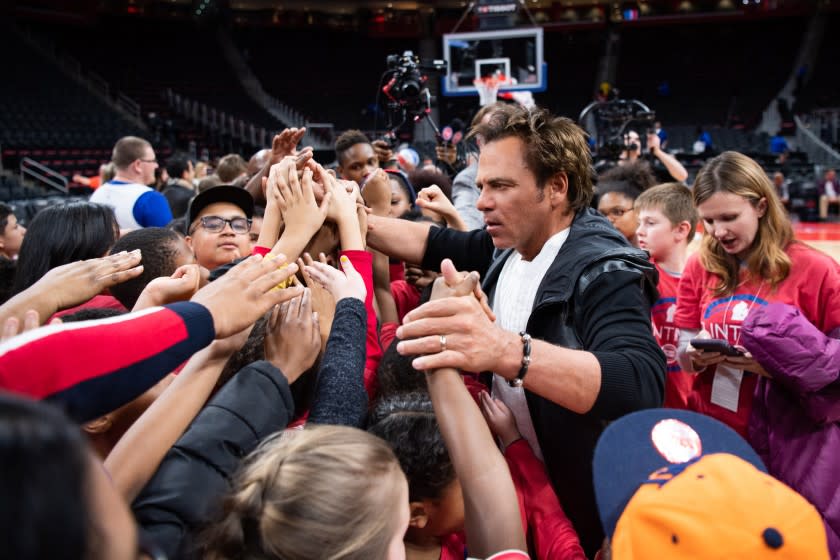 Activists have been pressuring Tom Gores ever since his private equity firm bought one of the nation’s largest prison phone companies. They have lobbied legislators, tried to squelch investments in his company, and now, with social justice in the fore, are bringing the fight to the L.A. billionaire’s social circles.

Leveraging demands for criminal-justice reform that have erupted since the death of George Floyd in police custody, two groups sent a letter last week to LACMA Director Michael Govan and the co-chairs of the museum’s board of trustees demanding that Gores lose his seat on the museum board.

The harshly worded two-page letter accuses Gores of profiting off the “deliberate exploitation of Black, Brown, and economically distressed communities” through his private equity firm’s ownership of Securus Technologies, which Gores’ Platinum Equity acquired in 2017.

“While people across the nation demand racial justice, Tom Gores continues to amass wealth and benefit from a system that exploits Black people and profits from our pain. Put simply, Tom Gores is a prison profiteer and has no place on the board of a prestigious public museum like the LACMA,” stated the Sept. 9 letter sent by Color of Change, an Oakland-based civil rights group formed after Hurricane Katrina, and Worth Rises, a New York nonprofit seeking to “dismantle the prison industrial complex.”

The campaign comes amid heightened focus on the NBA, where Gores owns the Detroit Pistons and the finals are soon underway. Players have protested police shootings of Black Americans and rallied around the resurgent “Black Lives Matter” movement, the name of which is emblazoned in large letters on court this season.

Gores declined to comment on the letter, which was sent after the firm and activists had been engaging on steps to lower call rates. Talks broke down in the spring after the reforms announced by Platinum failed to satisfy activists and a planned face-to-face meeting between Gores and letter co-signatory Bianca Tylek, founder of Worth Rises, never materialized. A Platinum spokesman said the company would continue its efforts.

“We’re doing the hard work of effecting real reform, we understand that execution matters more than rhetoric, and we trust the work speaks for itself,” Platinum partner Mark Barnhill said in an email. “They don’t want to acknowledge or assist with our reforms because that would rob them of an adversary they need to fuel their cause.”

Govan also declined comment. The museum issued a statement that the board received the letter and is “working to come together to discuss it.” Board co-chair Antony Ressler, an L.A. billionaire who also is the majority owner of an NBA team — the Atlanta Hawks — and co-chair Elaine Wynn, the largest shareholder in Wynn Resorts in Las Vegas, could not be reached for comment.

Gores, who has an estimated net worth of $5.7 billion and became a LACMA trustee in 2006, is not the first business leader on an arts board targeted by activists over ties to the criminal justice system.

Warren Kanders resigned last year as vice chair of the Whitney Museum in New York over his ownership of Safariland, a company that makes tear gas and other equipment used by law enforcement and the military. Activists also called for the resignation of BlackRock chief executive Larry Fink from that city’s Museum of Modern Art board over the investment firm’s reported stakes in private prison operators GEO Group and CoreCivic.

While criminal justice reformers advocates have long attacked private prison operators — which under a new law are being phased out in California — they also have begun targeting companies that offer communications, ankle bracelet tracking and other services to inmates for fees they consider exorbitant.

Activists began focusing on Gores three years ago when his Beverly Hills private equity firm acquired Securus for $1.6 billion, calling on him in 2018 to make reforms and sell the telecom. They tried to convince public pension funds to not invest in Platinum’s latest buyout fund. The campaign prompted the Pennsylvania State Employees’ Retirement System to opt out, but it did not prevent Platinum from raising $10 billion last year — $2 billion over its target and its biggest fund yet.

Prison telecoms charge a premium for calls, which are monitored for security purposes. Activists have calculated that Securus charged the highest rates in the industry, with one 2018 survey finding 226 of the 250 most expensive jails in the nation had contracts with the company, with three in Arkansas charging $24.82 for a 15-minute call. Those costs are typically borne by inmates and their families, a population that is disproportionately poor and nonwhite.

Platinum specializes in turning around troubled companies, and earlier this year it announced that it had brought in new management and released its pledged reforms. They included a bigger commitment to providing education and reentry opportunities to inmates while working with corrections agencies to bring down fees and rates, including elimination of the highest “legacy outlier rates.”

It also said it would “build on” a pledge it already made to offer contracts without so-called site commissions— added call charges that help fund jails and prisons. (In 2018, Securus signed just such a contract with the Illinois Department of Corrections, which had been pressured from state activists over high rates and commissions. The new contract brought rates down to 1 cent per minute.)

Dave Abel, a former IBM executive and PwC partner brought in to run Securus and its parent company, told The Times this week that the telecom has already renegotiated contracts with 58 agencies that had call rates that “previously exceeded national averages,” lowering them in some cases by 60% or more.

He said efforts to lower rates had brought the average cost of a call under 15 cents a minute, while in June more than half cost under $1 and only 0.01% cost more than $20. He said data from last month showed there were zero calls that cost more than $15 for 15 minutes.

“There’s a lot that we’ve done, and I’m incredibly humbled by the amount that remains to be done,” said Abel, who said the company’s for-profit business model is what provides the capital for additional services such as educational opportunities, secure computer tablets and licensed entertainment.

Activists, however, are pushing for far more and faster cuts, especially in local jails where rates and commissions tend to be higher. Last year, they were successful in lobbying New York to become the first major city to offer free phone calls in jails after the corrections system negotiated a contract with Securus that got the city’s costs down to 3 cents a minute. A willingness to sign such “agency-paid” contracts is one of the company’s pledges.

This year, San Francisco became the first county in the nation to offer free phone calls when it negotiated a contract with another telecom for a fixed rate per line.

Activists had threatened to bring their campaign against Gores to Detroit, where the private equity titan has a higher public profile as the Pistons’ owner. In the state where he was raised, Gores has cultivated an image of a progressive owner, supporting player activism and recently offering the team’s training facility as a polling place amid the virus outbreak. But that effort by activists didn’t really get off the ground when the season was upended by the coronavirus.

While activists acknowledge that the company has brought down rates, Scott Roberts, senior director of criminal justice campaigns at Color of Change, said that the steps taken so far have been “superficial” and that incarcerated individuals and their families still pay too much to communicate.

He said forcing Gores to unload the business should actually make it easier to pressure governments and corrections agencies to sharply lower rates since Gores’ involvement lends credibility to the business — even if Securus is acquired by someone who does not engage activists at all.

“This is a guy who’s a legitimate businessman, already had an ungodly amount of money and made a real choice to get into this type of business. Not only that, he positions himself as a community leader, in Detroit specifically but also in L.A. because he sits on the board of institutions like the Museum of Art,” said Roberts, who co-signed the letter to LACMA.

The campaign to force Gores off the LACMA board prompted artist and former LACMA curatorial assistant Jessica Simmons to write and pass around her own open letter to the L.A. arts community calling for Gores’ resignation from the board of trustees. She noted the museum had released its own statement in support of social justice following Floyd’s death.

“Where there is a lot of money, a lot of times that money is dirty,” said Simmons, noting the multiple controversies in the arts world regarding board members. “I think there is a lot of ground support for something like this, but I also think that people here just had no idea.”

The letter was being presented Wednesday to the museum and had more than 100 signatures.