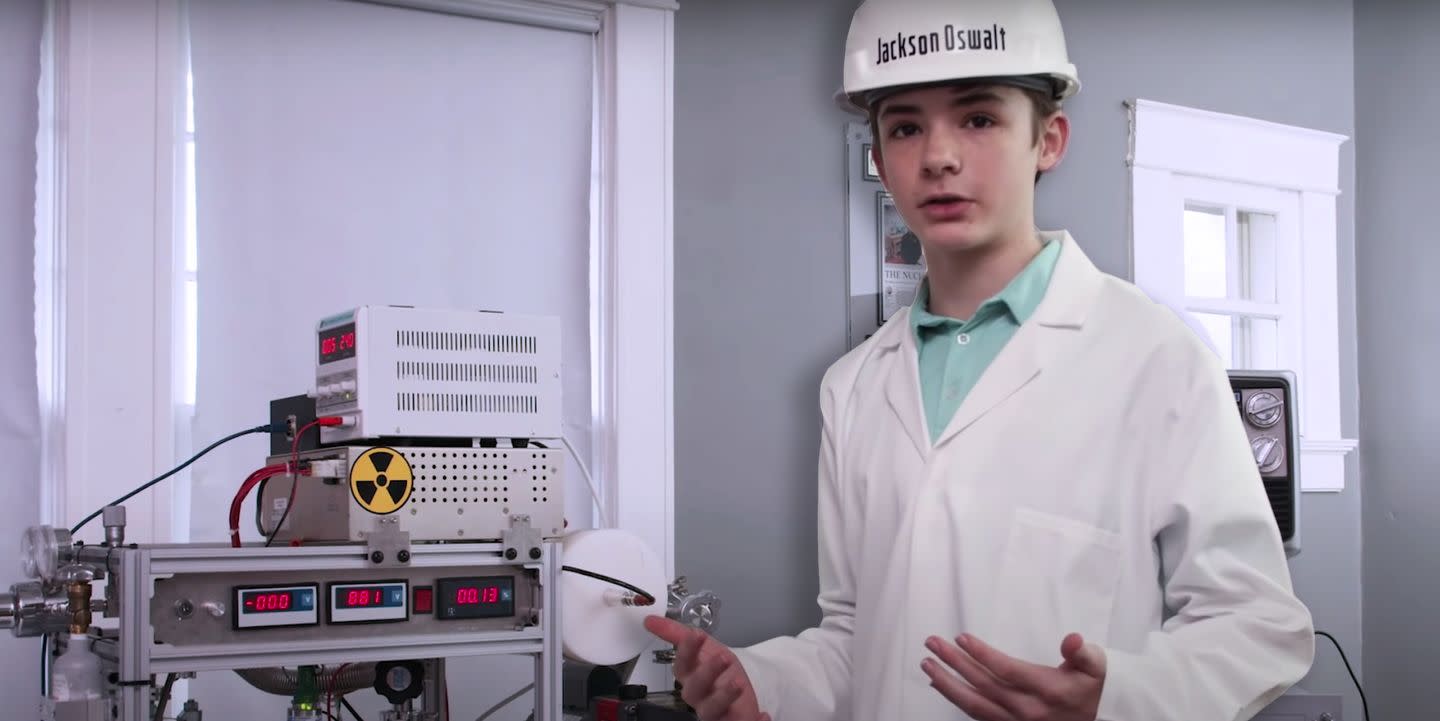 A teen genius at a U.S. middle school has built a working, tiny nuclear fusion reactor—and made it into Guinness World Records “just hours” before his 13th birthday, Futurism reports.

☢️ You love nuclear. So do we. Let’s nerd out over nuclear together.

“I’ve been able to use electricity to accelerate two atoms of deuterium together so they fuse into an atom of helium-3 and also release a neutron, which can be used to heat up water and turn a steam engine, which in turn produces electricity,” says Jackson Oswalt, of Memphis, Tennessee, in the video below:

“I won’t be doing full-on fusion, but I’ll still be creating a plasma within the chamber here,” Oswalt says, introducing a demo. “I’d say [the] hardest part was trying to figure out how to make the seal airtight on the chamber, so I spent about probably half a year trying to get the seal correct.”

“We didn’t know enough to have reservations, to be honest,” Oswalt’s dad jokes in the video.

There are some key definitions and points to keep in mind here. Oswalt is industrious and obviously very bright, but he’s just one of a thriving community of homemade fusion makers. Remember the college student who tried to sell an almost-ready-to-use fusion reactor to pay his college tuition?

These reactors are fun and exciting, but they use far more energy than they replace, compared with the commercial power fusion projects aiming for fusion that outpaces the energy put into them. Nuclear fusion can never be a power source unless it well exceeds the energy required to reach and sustain fusion.

At just 12 years old, Oswalt beat the previous world record by a full two years. He joins a running list of “fusioneers” who have achieved fusion at home. Richard Hull, who keeps the list, is himself part of the club.

📚Read Up: The Best Nuclear Books

Oswalt joins both the overall list and the special high school (or below!) list with his 2018 feat. Listed fusioneers have accomplished goals ranging from winning a school science fair to earning a $75,000 college scholarship, which really shows how you have to choose your fusion audience carefully.

Oswalt is 15 now, and he’s decidedly out of his cool tween fusion phase. “Now, at 15 years old, Jackson no longer conducts experiments that often, as he’s decided to look for his ‘next best thing,’” Guinness reports. That’s a big teen mood, but for someone who achieved fusion at 12, that next best thing is probably . . . pretty huge.