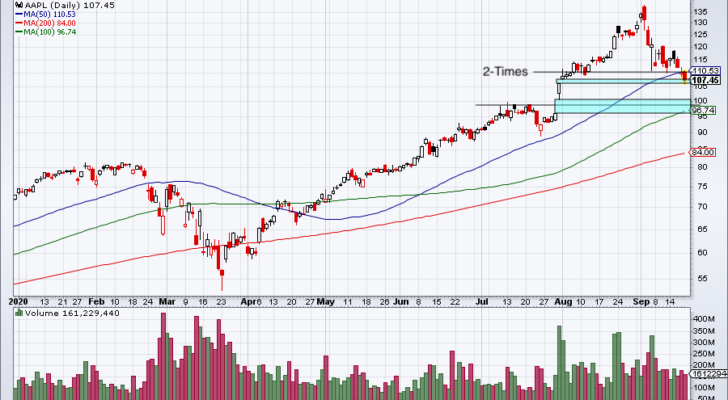 It was a quadruple witching day, one of four in the year that can create tough trading environments amid choppy price action. With that in mind, let’s look at a few top stock trades for next week.

Big tech hasn’t been doing great. And with its dominant market cap, Apple (NASDAQ:AAPL) is often atop the list of stocks to watch.

Shares violently corrected lower at the start of September. And while that action was initially met by buyers, it has ultimately resulted in a series of lower highs. Now, the stock is failing to hold the two-times range extension and more importantly, the 50-day moving average.

Should Apple lose $105, though, it puts the psychologically-relevant $100 mark in play — followed by a possible gap-fill toward $96. I would love a dip to the latter. Not only will Apple fill both of its post-earnings gaps, it will trade down into the 100-day and 20-week moving averages, as well as the 200-day moving average on the four-hour chart.

Of the mega-tech stocks out there, Alphabet (NASDAQ:GOOGL, NASDAQ:GOOG) has been one of the slower moving names.

After its quick pullback earlier this month, shares almost instantly failed to hold the 50-day moving average, while also struggling with its pre-coronavirus highs. The stock almost just as quickly lost the 100-day moving average.

There are investment arguments to be made for owning this name. However, from a technical perspective, it’s in no man’s land right now.

In a nutshell, traders either need a larger pullback into support or some rotation to the upside that shows commitment.

Norwegian Cruise Line (NYSE:NCLH) tried twice to breakout this month, but both times it was rejected by the 23.6% retracement.

Now fading from that level, it’s coming into a key area. While the failed breakout is disappointing, to see Norwegian hold the 20-day and 50-day moving averages would be quite constructive.

Above these marks keeps a retest of the September highs in play. If they fail as support, though, it puts $15 in play.

This is where things get a little dicey. If Norwegian were to close below $15, it would open the door to (although not guarantee) a test of the August low, near $12.50.

Overall, stay on your toes with this one if you’re trading it.

Unlike Alphabet, which is in a state of limbo, PayPal (NASDAQ:PYPL) is now trading down into a reasonable risk/reward level.

That’s not to say this is an all-in long — no stock ever is when trading — but just that the setup is attractive right here. The stock is down almost 20% after declining in eight of 11 trading sessions (if we include Friday).

Now fetching a bid at the 100-day moving average (and the 200-day moving average on the four-hour chart), bulls have a defined low (at $171.63, Friday’s low). Those who are buying want to see PayPal stay above that mark while looking for rotation over the two-day high at $178.75.

Above that mark almost immediately puts $180 back in play to fill Thursday’s small gap. A move over that mark opens the door back to the 50-day moving average, which has been resistance.

If PayPal breaks Friday’s low and can’t reclaim it, it puts the two-times range extension in play at $166.83, and potentially lower.

On the date of publication, Bret Kenwell held a long position in AAPL.

Bret Kenwell is the manager and author of Future Blue Chips and is on Twitter @BretKenwell.