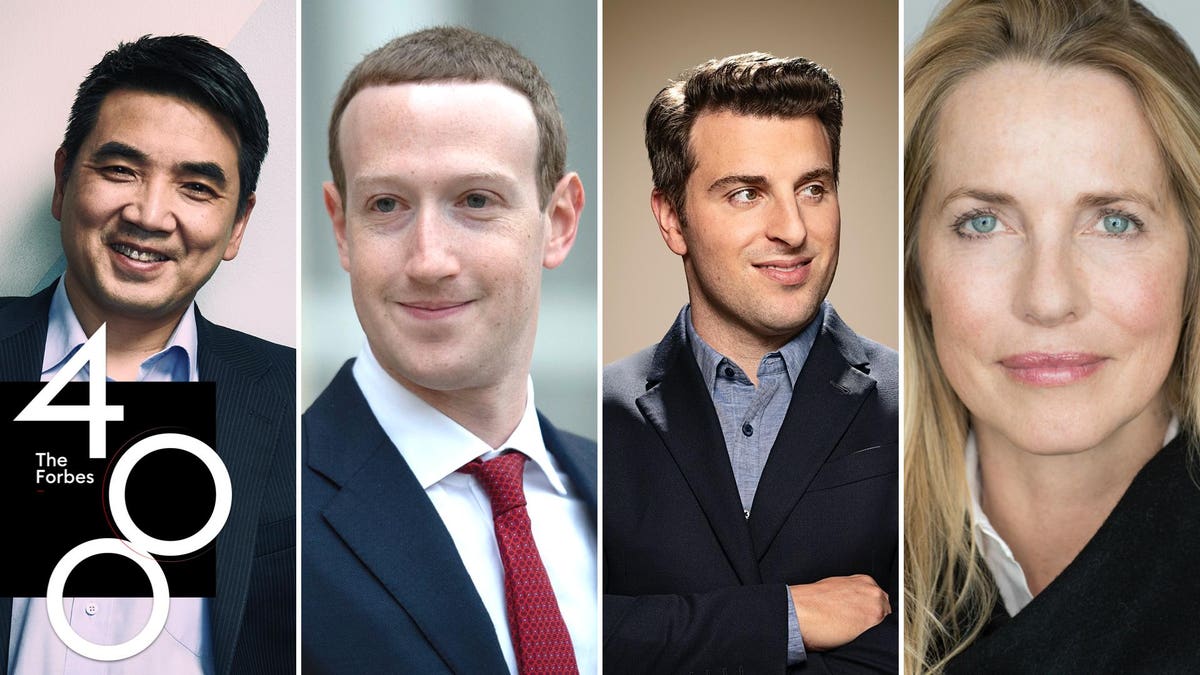 Led by gains in tech stocks, they are worth a combined $815 billion —more than ever before.

If you were to guess that the U.S. state with the biggest population and the largest economic output would have by far the most members of The Forbes 400 list of richest Americans, you would be right. Again. This year, pandemic be damned, that cohort in California is richer than ever.

Technology continues to fuel unrivaled wealth creation, with 44  in  the state building their fortunes from consumer apps, hardware, cybersecurity and venture capital — more than any other sector. The six wealthiest Californians all have fortunes tied to tech, including Facebook’s Mark Zuckerberg (net worth:$85 billion) and philanthropist and investor Laurene Powell Jobs (net worth:$16 billion).

Silicon Valley welcomed two new Forbes 400 members this year: Eric Yuan of Zoom, whose video conferencing company experienced a torrent of new users amid the pandemic, and Ken Xie of Fortinet, a cybersecurity firm that has been listed since 2009 but whose shares shot up 67.3% in the last year thanks to consistently healthy earnings and higher demand for its services.

Another newcomer fromCalifornia: Alice Schwartz, who at 94, is the oldest of the 18 new to the list.. She cofounded Bio-Rad Laboratories with her husband David (d. 2012) in 1952;  it sells life science research and clinical diagnostic products Because its products have been used for Covid-19 diagnostic screening, vaccine development and more, its stock doubled in value in the last year. Schwartz remains on the board with an 11% stake of the $2.3 billion (2019 sales) company; her son, Norman, is the CEO.

Despite the collective increase in net worth,  some of these wealthy Californians’  businesses got pummeled by Covid-19. The three cofounders of Airbnb — Brian Chesky, Nathan Blecharcyzk and Joe Gebbia — are down $1.1 billion each, or 26.% from last year, following a slash in valution of their privately-held home rental company from $35 billion to as low as $26 billion in April. The drop came, traveling came to a near standstill  during the  pandemic. But the cofounders are forging ahead — in August Airbnb confidentially filed to go public.

California’s stronghold as the land of so many of the country’s richest  will likely continue for some time. The state with the second largest number of Forbes 400 members is New York, with 73,  followed by Florida with 37 list members and Texas with 36. So long as entrepreneurs in California continue  to innovate, look out for more new Forbes 400 members in the Golden State.

Here, the ten richest Forbes 400 members who live in California.

Even after over a thousand advertisers, including Adidas and Clorox, joined an advertising boycott on Facebook starting in mid-June to oppose what they say is the social media giant’s weak policing of hate speech, usage and ad revenue continue to grow.

The Oracle founder enlisted his company’s engineers to build a database for the U.S. government to track results of Covid-19 treatments, as well as the website Covid-19 Prevention Network, which allows volunteers to sign up for Phase 3 clinical trials for vaccines.

In May, Musk’s rocket company, SpaceX, announced it had raised $346 million at a $35.9 billion valuation. Meanwhile, Tesla’s stock increased sixfold from September 2012 to July, adding over $48 billion to his net worth.

The Google co-founders stepped down from their roles as president (Brin) and CEO (Page) of parent company Alphabet in December, but they remain board members and controlling shareholders.

Powell Jobs, who inherited her fortune from her late husband, Apple cofounder Steve Jobs, spent the last year working on her title as a philanthropist and investor, including contributing to Covid-19 relief efforts and investing in social impact companies.

Schmidt, who left the board of Google parent company Alphabet in June 2019 after serving as a director for 18 years, reportedly criticized the government in September for its “slow” reaction to the coronavirus.

The Facebook cofounder left the social network in 2008 to start Asana, his work collaboration app, which filed its public S-1 in August.

Yuan, who cofounded online video conferencing tool Zoom in 2011, has seen his company’s stock skyrocket over 450% this year. This is his debut on The Forbes 400 list.