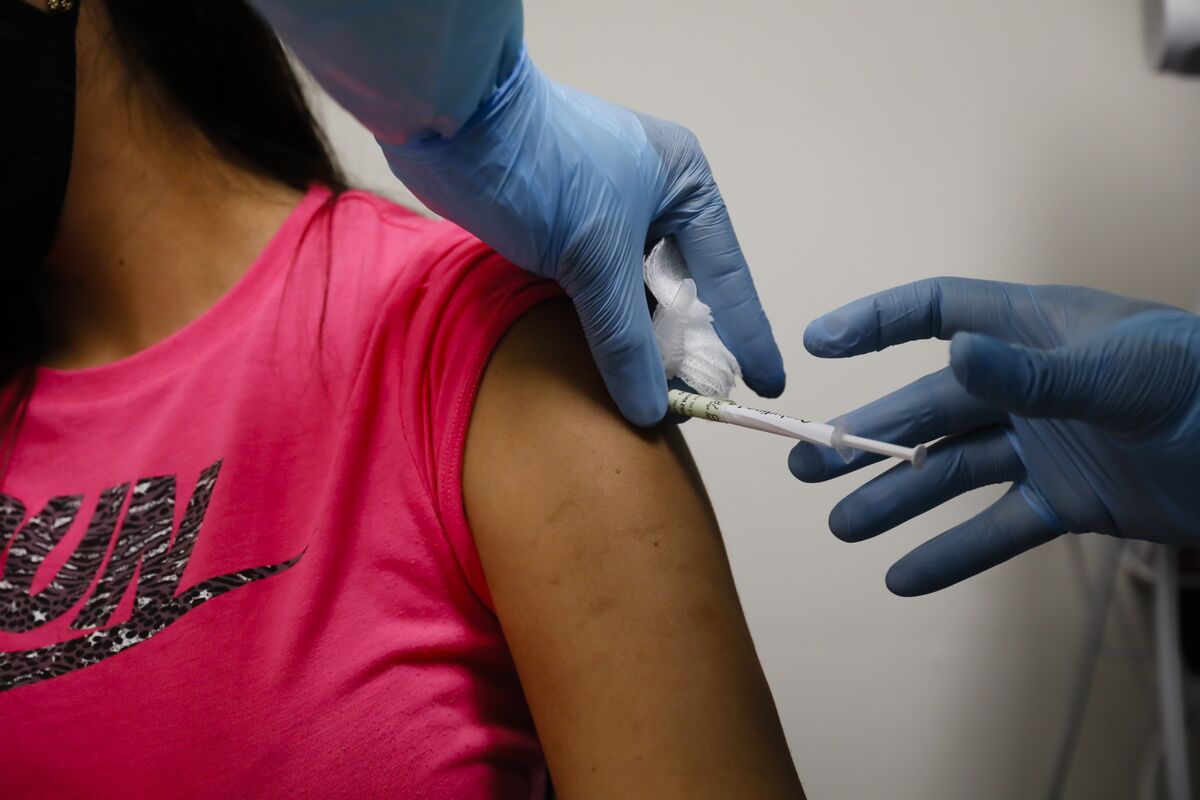 John Authers is a senior editor for markets. Before Bloomberg, he spent 29 years with the Financial Times, where he was head of the Lex Column and chief markets commentator. He is the author of “The Fearful Rise of Markets” and other books.

To get John Authers’ newsletter delivered directly to your inbox, sign up here.

All Present and Incorrect

Tech stocks didn’t have to endure much of a correction. All the sectors that had been doing mighty well until hitting a traffic bump at the end of last week rebounded Wednesday. It would be unwise to assume this is over, but for now the most important point is that the excesses of the post-Covid rally haven’t been corrected (and not just because it is still premature to declare the pandemic over). The Nasdaq 100 never quite dropped to its 50-day moving average before bouncing:

For context, the Nasdaq 100 has had only eight winning streaks this long in its history, which goes back to 1985. The following chart is from Bespoke Investment Group:

Other indexes behaved as though little or nothing had happened. The dollar briefly strengthened, as would be expected when oil is falling and investors are feeling “risk-off” but, like the Nasdaq 100, without breaking its 50-day moving average. Bond markets showed little sign that anything had happened. For now, this looks like a removal of some froth from a market that had grown truly overstretched. The good news is that collateral damage so far appears to have been minimal. The bad news is that it would have been healthier if the excess had been genuinely corrected.

On the subject of health, there has also been news on vaccines in the last few days, and the market’s attitude to clinical testing appears to have matured. Various vaccines have now reached “Stage Three” trials on large numbers of humans, years earlier than normally happens. President Trump refers to the effort as “Operation Warp Speed,” and development is indeed happening very fast.

However, pharmaceutical stocks, and indeed the entire market, have leapt around on minor news of vaccine test results so far this year — most dramatically, and absurdly, when Moderna Inc. helped spark a market-wide rally in May. There is a beguiling belief that a vaccine will solve everything, despite evidence it will take months to distribute even once safe to do so, and that it will be a major challenge to overcome “vaccine hesitancy” among the many people dubious about the haste of development.

That suggests there was something positive in the way the market reacted to the news that AstraZeneca Plc was pausing human tests of a vaccine developed at the University of Oxford because one volunteer had suffered an unexplained illness. As the Oxford vaccine is widely regarded as the single most promising candidate, this could have been taken as a serious and negative development.

Instead, AstraZenca’s share price suffered only a brief sell-off, and stock markets rebounded. That, as my colleague Max Nisen suggests, implies that the market is beginning to treat vaccine development more sensibly. A high level of transparency is necessary to assuage public doubts about the process — but this will naturally tend to churn up market volatility. By the end of the day, AstraZeneca had regained its lost ground, and was up significantly for the week, perhaps aided by comments from its CEO that the unfortunate patient was likely to be discharged from hospital within a day.

In terms of an over-excitable market, this has to be viewed as positive. If comparably serious news had broken three months ago, it might have forced the market to retest its lows. This time it was swiftly brushed aside. That said, confidence that a vaccine will bring the economic disruption caused by the pandemic to an end appears to be wildly overdone, still.

Hopes in the Herd

If there is an explanation for this, it may lie in one of the other narratives that has driven the market for months — “herd immunity.” Originally coined by public health researchers to refer to the proportion of a population that needed to be vaccinated before the “herd” was effectively immune, the notion is now taken to refer to allowing the disease to run its course. There are moral issues connected with this, particularly as the severity and prevalence of long-term damage from the virus is still little understood. But plenty of research is doing the rounds of investment houses suggesting that the virus will burn itself out naturally, because herd immunity has already been achieved, or is at least very close.

The recent course of the disease in the U.S. gives succor to this narrative. Recent outbreaks have been among students and school children, age groups least likely to die from the virus. Meanwhile, the trend in cases is clearly downward, and no region that has undergone a major outbreak has suffered a second one. All of this can be taken as evidence that the U.S. is well on the way to establishing herd immunity:

The declining death rate as a proportion of global cases is another important part of the argument. The medical profession is learning how to keep Covid-19 patients alive as time progresses, while the increase in testing means there are fewer undiscovered cases. But the phenomenon may also indicate progress toward herd immunity, as more younger people are infected.

The more younger people catch the virus, the closer the world will come to herd immunity, according to the theory circulating in investment houses. Once they are immune, they will no longer be at risk of infecting their parents and grandparents.

The steady increase in cases in western Europe, after aggressive lockdowns that appeared to have been successful, is also taken to support this narrative. Lockdowns, on this argument, may actually be counterproductive. They slow the process of reaching herd immunity. There are more French, British and Spanish bodies still to be infected, and so the virus can take hold again. The critical test case, as I have written before, will come in Scandinavia. This chart shows cases per day in Sweden and neighboring Denmark, which has a slightly smaller population.

Sweden famously opted to let the virus “rip” while Denmark instituted an orthodox lockdown. Over the summer, this led to far more cases in Sweden. Now, the virus appears to have blown itself out in Sweden, and Danish cases are now at a similar level. If the lines on this chart cross, and Denmark’s ongoing experience with the pandemic remains worse than Sweden’s, that could be the closest the world comes to proof that lockdowns weren’t in fact worth it. It is still far too early for supporters of the Swedish approach to declare victory. Sweden’s cases appear to have ticked up slightly in the last week; if it turns out that this virus is seasonal, and will become more of a problem as winter falls, then a lot of the hopes in herd immunity will be disappointed.

But judging by the number of times different people have sent me the same few pieces of research, I suspect that the “herd immunity” narrative may now have precedence over the “vaccine will solve everything” narrative. The fact that the bad news about the AstraZeneca study was taken so calmly by the market adds evidence for this proposition.

I am not qualified to judge, and there is obvious deep division among epidemiologists and doctors over the facts. So I would be careful about putting too much capital to work on an assumption about the behavior of a virus that has been known to science for less than a year. But I — and I’m sure most of the human race — would love to believe any theory that the virus will soon go away.

If you want a political hedge, I suggested last week that the Chinese yuan might work. Good news for Donald Trump would plainly be regarded as bad news for China’s currency. Or, as the yuan isn’t allowed to move purely in line with the market, a Trump victory might prompt the authorities into a deliberate weakening, which comes to the same thing.

The problem with the yuan as a political hedge, however, is precisely that it isn’t free to move with shifts in market sentiment the way other currencies are. That leads to a great suggestion from Alan Ruskin, FX strategist with Deutsche Bank AG, to use the Russian ruble instead. The ruble is nothing if not volatile, and its fortunes are evidently linked to Trump’s; it is hard to imagine any other American president being prepared to overlook Russian transgressions on such a scale. A Biden victory would be unquestionably negative for Russia.

The Covid-19 crisis and the sudden collapse of the oil price, which both broke out in full virulence in March, naturally tend to flood out everything else over the last 12 months. But if we compare the ruble-dollar exchange rate with the prediction markets’ margin for the Democrats over the Republicans, some relationship is just about discernible:

Oil is the single most important driver of the ruble. For all his bravado, Vladimir Putin has failed to convert Russia from its almost total economic reliance on hydro-carbons. Oil’s recovery over the last few months is failing again, just as the OPEC discipline encouraged by Trump is weakening once more. An interesting point here is that China is a major oil importer, and is therefore helped by a lower price. For those who see a weakening oil price and a strengthening Biden over the next couple of months, therefore, it makes sense to buy the yuan against the ruble. This chart is from Ruskin:

So, if you think that Trump is going to win the election, while oil avoids another sell-off, buy the ruble against the yuan. And if you want to bet on Uncle Joe, buy the yuan against the ruble.

The latest grand political news story gives us all a great excuse to re-watch All the President’s Men. Bob Woodward, half of the reporting duo of Woodward and Bernstein and played in the movie by Robert Redford, has announced that he taped a series of conversations with President Trump over the opening months of this year. This includes the journalistic “gotcha” that Trump knew the coronavirus was more serious than he was saying in public.

It’s not clear to me that this will change the politics of the election campaign much. But the echoes from the movie made for some fun on social media. How could the president possibly have agreed to give a series of taped interviews to the co-author of All the President’s Men in the early stages of an election year? Had he never seen the film? Did he know nothing about the downfall of Richard Nixon?

It’s a truly great movie. Jason Robards as the Post’s legendary editor Ben Bradlee shows everyone how to do it. All of us could benefit from a tough boss like him. The scenes of reporting from an era of landlines, rotary phones and typewriters are good for the soul. And of course we should all follow Deep Throat’s advice to “follow the money.”

So that’s a survival tip: Watch All the President’s Men. Its lessons remain as valid as ever. It might have aided the president’s survival if he had done so.

To contact the author of this story:
John Authers at jauthers@bloomberg.net

To contact the editor responsible for this story:
Matthew Brooker at mbrooker1@bloomberg.net

John Authers is a senior editor for markets. Before Bloomberg, he spent 29 years with the Financial Times, where he was head of the Lex Column and chief markets commentator. He is the author of “The Fearful Rise of Markets” and other books.

Instagram bug made users vulnerable to hackers, according to this report [Video]