Sorting Through the Science on Breast Milk and Covid-19 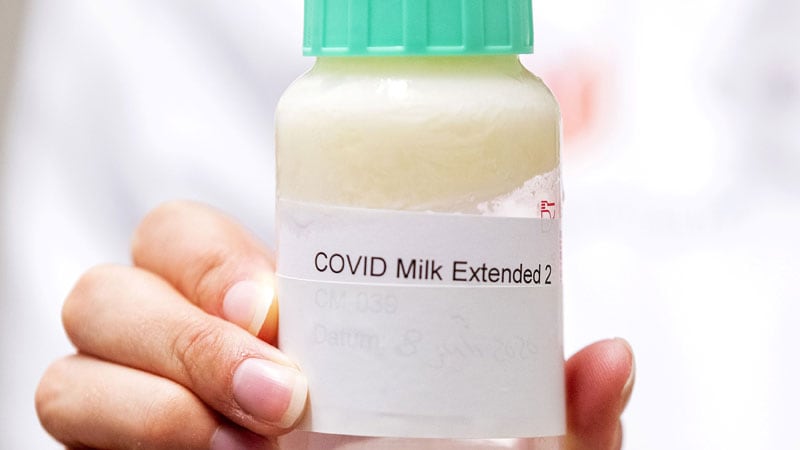 Since the Covid-19 pandemic struck, headlines have been full of fluids. There are droplets sprayed when we talk or cough, nasal secretions swabbed for testing, and blood checked for antibodies. But some scientists have focused on a different bodily product: breast milk.

Unlike the others, milk is a fluid made for sharing. That has raised urgent questions about its safety during the crisis, for mothers feeding babies as well as for milk banks handling donations. When an advisory panel for Australian Red Cross Lifeblood, which manages milk banking as well as blood donation, met in March, “there was a lot that was still unknown about Covid-19,” Laura Klein, a research fellow with the organization, wrote via email. “We didn’t know then if the virus could be transmitted through breast milk,” as some other viruses, including HIV and cytomegalovirus, can.

If the virus lurked in breast milk, should infected mothers give their babies formula instead? There were more unknowns. Did milk banks need to take extra precautions with donations? Did breast milk from previously infected women carry antibodies, and could those antibodies protect babies — or maybe other people?

With more than 250 papers on Covid-19 and infant feeding published since February, researchers are beginning to answer these questions, while at the same time contributing to the poorly understood field of breast milk science more generally. They’re discovering that in the time of Covid-19, breast milk is not a fluid to fear.

In the early stages of the pandemic, though, governments were highly cautious when it came to breast milk. In China, where the new coronavirus first emerged, a group of physicians and researchers developed an expert consensus on how to handle infected mothers. Published in February, the document said that infected mothers, and even those with suspected infections, should not breastfeed their babies.

As the virus spread globally, other countries were similarly cautious. In as-yet unpublished research, a team of researchers including experts from Alive & Thrive, a global organization dedicated to maternal and child nutrition, reviewed guidelines on Covid-19 and newborn care from 33 countries. They found that 49 percent either advised against breastfeeding, or created hurdles such as counseling families on the risks of breastfeeding or requiring a negative swab test first, wrote nutritionist Jennifer Cashin, one of the study authors, by email.

Another hurdle to breastfeeding arose in the United States, where the Centers for Disease Control and Prevention initially suggested separating infected mothers from their newborns. If mothers wanted to, they could pump milk for someone else to feed their babies. Although the CDC no longer recommends separation, Cashin said the original stance influenced other countries’ guidelines.

In February, an expert consensus from China said that infected mothers, and even those with suspected infections, should not breastfeed their babies.

The authors of some of the scientific papers published this spring have also asserted that women with Covid-19 shouldn’t necessarily breastfeed. This caution came despite little evidence of danger, wrote University of North Carolina assistant professor and medical anthropologist Aunchalee Palmquist and coauthors in a commentary for the American Journal of Human Biology.

“Scientists are making recommendations without strong evidence, and many are starting with a problematic assumption,” Palmquist wrote in an email — namely, that any chance of virus in milk means women should stop breastfeeding. “The reality is that it’s just not that simple.”

She and others compare the current pandemic to the outbreak of HIV in the 1980s. At the beginning of that pandemic, researchers found the virus in breast milk, and soon infected mothers worldwide were advised not to breastfeed. But breastfeeding is especially critical for infants’ health in the developing world, where many babies die of diarrhea from unclean water, making formula a risky choice. Because HIV passes to babies through milk only infrequently, avoiding breastfeeding did more harm than good in developing countries, researchers say.

Today, the World Health Organization advises that even when mothers have Covid-19, “the benefits of breastfeeding substantially outweigh the potential risks for transmission.”

This recent caution over breast milk stems from the fact that there’s still so much about it that we don’t know. At the University of California, San Diego, researchers are collecting breast milk at a biorepository for scientific research. Their ongoing work is trying to address a huge range of unanswered questions, said Christina Chambers, a perinatal epidemiologist and professor of pediatrics at the university. For example, how does the nutrient content of breast milk vary? What medications can pass into milk, and which ones are safe for breastfeeding mothers to take? What about cannabis? How do the immune components of a mother’s milk change when her baby is sick?

With their existing networks, the scientists were well positioned to start answering the question of whether SARS-CoV-2 can spread through the breastmilk of infected women. Earlier case studies had found snippets of the new coronavirus’ genetic material in breast milk. But by the late spring, no studies had proven that milk held live virus, capable of making a baby sick.

Chambers and her coauthors collected milk from 18 women who had tested positive for Covid-19. The volunteers provided breast milk from around the time they’d first tested positive, and many gave repeat samples afterward, amounting to 64 total samples.

When the researchers tested the milk for the coronavirus, they found its genetic material in just one of the 64 samples. A donor had collected that milk on the day her symptoms started. But the sample didn’t contain any live virus that could have infected someone. The results were published in the Journal of the American Medical Association.

Jim Thornton, an obstetrician and professor at the University of Nottingham in the United Kingdom who in June coauthored a review of the evidence on mothers transmitting SARS-CoV-2 to newborns, said the lab findings fit with what’s happening in the real world. “We’re certainly seeing very, very few babies who are infected,” Thornton said. “It’s almost certainly safe to breastfeed.”

The result is reassuring. Still, “it’s not the definitive answer,” Chambers said. When it comes to Covid-19, “as data evolves, there are surprises everywhere.” These 18 women had safe breast milk, but that doesn’t prove that the virus can never be present. The researchers plan to repeat their investigation with a larger number of samples, as well as look for antibodies in the milk.

Nonprofit milk banks, which provide breast milk to hospitalized premature babies, were initially unsure of what precautions they needed to take. In general, after collecting milk from donors, banks heat the milk to 144.5 degrees Fahrenheit for 30 minutes to kill microbes — a process known as Holder pasteurization.

It was assumed this process would kill SARS-CoV-2, although some microbes can survive heating. Researchers in Australia set out to answer the question definitively. Klein said that for the study they used frozen donated milk they couldn’t give to babies, such as milk from donors who were taking certain medications. They also reached out to some existing donors and asked for a little freshly pumped breast milk.

Scientists then spiked the milk samples with live SARS-CoV-2 virus. Some of the infected milk was refrigerated or frozen, to replicate how mothers would store it at home. Other milk underwent Holder pasteurization. Cold storage didn’t eliminate the virus, the scientists found — but pasteurization wiped it out. The team’s findings have been published in the Journal of Pediatrics and Child Health.

“The results were very much what we expected to see,” Klein says. Milk banks around the world use Holder pasteurization because it kills many kinds of viruses, she said, including the coronaviruses that cause SARS and MERS. Based on the new results, “We can be confident that pasteurization would kill any amount of virus that might be in donated breast milk in the real world.”

Before infants start developing their own immune response to viruses and other threats, they receive a sampling of their mothers’ antibodies to tide them over. These antibodies come first through a mother’s placenta, and then in her milk, if she breastfeeds. Most antibodies in milk are a type called secretory IgA. They give babies what’s called passive immunity: temporary disease resistance that’s replenished with every meal.

When the coronavirus pandemic began, doctors and scientists wondered whether mothers who’d been infected would pass antibodies against SARS-CoV-2 through their milk that might protect their babies. “We needed to know,” said Rebecca Powell, a human milk immunologist and assistant professor at Icahn School of Medicine at Mount Sinai in New York City.

The research question was a natural pivot from her recent work studying the immune response in breast milk to seasonal flu. And since her city was the disease’s epicenter at the time, potential research participants were all around. Powell began using Facebook to recruit breastfeeding moms who had been infected with Covid-19. So far she’s enrolled about 800 donors, and she’s following about 600 more volunteers who are at high risk of infection.

In a paper that’s currently under peer review, Powell and her coauthors tested milk from 15 of those donors for antibodies to SARS-CoV-2. They found antibodies in every one of the samples, Powell says.

Powell says it’s too soon to know how much protection, if any, these antibodies give to breastfeeding infants. But Powell is also interested in the idea of taking these antibodies out of the milk and using them as a treatment for Covid-19. Researchers are already doing something similar involving recovered patients, transferring their antibody-rich blood plasma to those who are sick.

She imagines using the antibodies in a respiratory therapy that patients could inhale — similar to an asthma treatment, for example — sending antibodies right to the site of infection. Secretory IgA antibodies, such as those in milk, are packaged by the body to be extra durable, Powell says. This lets them survive in environments such as the respiratory or digestive tract. In blood, the most common antibodies are a less durable type called IgG. This might make breast milk antibodies a more useful potential therapy than convalescent plasma, Powell speculated.

Genevieve Fouda, a pediatric immunologist and associate professor at Duke University in North Carolina, wrote in an email that using breast milk antibodies as a therapy is an interesting, if untested, idea. “But it would first be important to fully characterize the function of these antibodies,” she said. “Can they neutralize the virus?”

Powell is now looking to answer more questions: What percentage of infected women have antibodies to SARS-CoV-2 in their milk afterward? How long after infection do the antibodies last? What if the mother got sick, and recovered, long before having a baby?

The research may reveal whether breast milk is not only safe, but useful in this pandemic. Powell will need a lot of people and their milk to gather enough data. But it’s doable, she said, because of the huge number of volunteers who have come forward to help with her project. “The response was overwhelming,” she said. “I mean, viral, really.”