Careful supervision needed to manage smartphone use in class 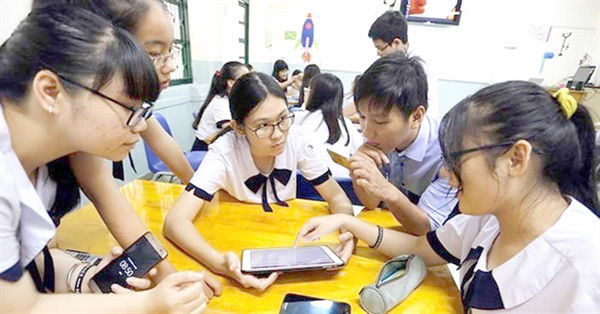 People up and down the country have endlessly discussed whether students should be allowed to use smartphones in class.

The discussion came after Circular No 32/2020/TT-BGDĐT, issued by the Ministry of Education last week, allowed students of secondary and high school to use mobile phones in class for studying purposes under the supervision of teachers from November 1.

Some people think it is a good idea, while others are strongly against it.

Huynh Thanh Phu, principal of Nguyen Du High School in District 10, HCM City, said it was a breakthrough. If students used their smartphones appropriately in a class, it would be an “electronic book” helping teachers solve many questions immediately instead of telling the students that the teachers would answer the questions in the next class.

Nguyen Bich Trang, a mother of a 6th-grade student of Tran Van On Secondary School, District 1, HCM City, said her child’s school had banned kids from using phones in class at the beginning of the year, so she was surprised to hear of the new regulation.

Trang did not think that it was necessary for students to bring smartphones to class to use modern methods of learning.

Dang Diem Linh, a mother of 7th-grader in Hanoi, said she fiercely opposed the new regulation.

Linh said her two children were allowed to use smart devices to learn English at home, however, they still played games or watched videos if unsupervised.

She added that it would be hard for teachers to supervise children’s smartphone use.

Sharing the same point of view, Tran Trung Hieu, a teacher of Phan Boi Chau High School, in the central province of Nghe An said: “Can the teacher supervise all the students in a class or not?”

“That is the most important thing,” he added, noting that it would be a tough task for teachers to stop students doing whatever they wanted with their phones in class.

Hoang Ngoc Vinh, a member of the Advisory Group of the National Committee on Education and Training Reform in the 2016-21 period, said in an article with Tiền Phong (Vanguard) online newspaper that students would interact with each other in class less if they used mobile phones in class.

The abuse of smart devices also led to lazy thinking and the inability to think deeply as search tools are always available, he said.

In response to the situation, Nguyen Xuan Thanh, head of the education ministry’s Secondary Education Department said the ministry unveiled the regulation to support students when they needed to find resources for their lessons with the permission of their teacher.

With the trend towards digital transformation in education, the education sector was encouraging teachers and students to apply information technology in teaching and learning, he said.

There are many resources online for learning and teaching and students in developed countries can learn in class while looking up information related to the lesson online, he said.

Additionally, under the circular, students were only allowed to use smartphones for learning purposes for a short time during class, not all the time, he said.

The regulation did not mean that the students could use their smartphones without supervision of their teacher, he said.

Vinh called for careful consideration before allowing students to use smartphones in class.

It would require consistent research on the amount of time students use their phones in class and the proportion of teachers able to guide students to use smartphones during class, he said.

“How the use of smartphones affects students’ behaviour and personality needs to be clarified to get their parents’ consent,” Vinh said.

According to To Thuy Diem Quyen, director of of InnEdu STEAM Company, a company specialised in consulting and educational development, schools and teachers should find practical solutions to supervise students instead of banning smartphone use in class.

A ban would hinder education from adapting to the digital world, she said.

Personally, I think that applying information technology in teaching and learning is catching the trend in the digital age.

However, the education ministry needs to issue more specific guidelines to have smooth co-ordination between schools, parents, teachers and students so the implementation of the circular will be as effective as hoped.

The ministry should compile a set of documents to teach the students skills on how to appropriately use smartphones and how to protect their private information online. Last but not least, providing students warnings about excessive smartphone use that will cause them harm is very necessary.

This will help the students learn well in the modern era but avoid harm from excessive smartphone use.  VNS

Teachers oppose use of smartphones during lessons

Many teachers have expressed their disagreement with the new regulation on allowing students to use phones during lessons, saying that it would be difficult to control students.