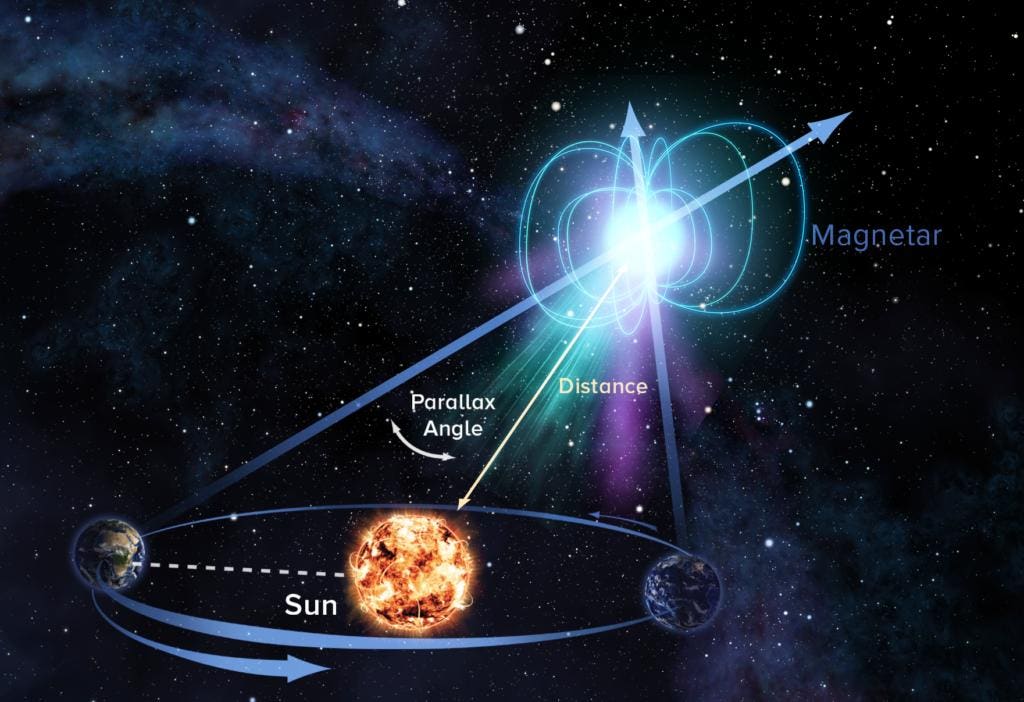 The universe is so vast that even the closest stars are light-years away. They are so distant that they were long thought to be fixed points in the velvet night. Since we can’t yet travel to the stars, measuring their distance is a challenge. Astronomers use a hierarchy of techniques known as the cosmic distance ladder, where the distance of nearby stars are used to determine the distance of farther objects such as galaxies and quasars. All of this is based upon the most basic method known as parallax.

Parallax relies upon the fact that the Earth orbits the Sun. Over six months, the position of the Earth shifts by 300 million kilometers. By observing a star’s location against more distant objects, we see that the star appears to shift as seen from different positions. This parallax shift is such that the closer a star is, the more significant the shift. Parallax is also one of the ways our brains calculate the distance of an object. Each of our eyes sees an object from a slightly different position, and our brain uses that information to calculate its parallax.

Of all the methods astronomers use in the cosmic distance ladder, parallax is the most accurate. As we measure the parallax of more distant objects, we gain a greater understanding of the cosmos’ scale. While most parallax measurements are of stars, parallax can also be measured for other objects. Recently a team measured the distance to a magnetar.

A magnetar is a pulsar with a strong magnetic field. Magnetars can emit powerful radio light and are thought to cause strange phenomena known as fast radio bursts (FRBs). But FRBs last for such a short time they are difficult to study.

The magnetar they measured is known as XTE J1810-197. It was first discovered in 2003 and emitted radio pulses from 2003 to 2008. Then in 2018, it began to emit radio pulses again. Using the Very Long Baseline Array, the team measured the magnetar’s position during most of 2019, then again in the spring of 2020. They determined its distance to be 8,100 light-years using parallax, which is quite close for a magnetar.

By knowing the precise distance of XTE J1810-197, astronomers can easily calculate the energy released by any burst of radio light it emits. If the magnetar emits an FRB, astronomers will be able to study the way FRBs are produced, which will help us solve the mystery of these strange radio flashes.